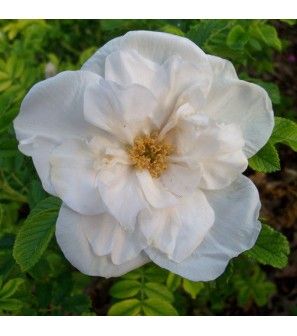 Well-known for its incredible hardiness and legendary disease resistance, Rosa rugosa, commonly known as rugosa Rose or Japanese Rose, is rich of many virtues and can be relied on to provide interest and color. Parent to many shrub roses, this is a vigorous, tough, prickly, sprawling, suckering shrub that is amazingly tolerant of dry sandy soils, salt spray and wind. It is covered with a plentiful array of remarkably fragrant, single, small pink flowers with yellow central stamens from early summer through the end of the growing season. Flowering is so profuse that the attractive blossoms nearly cover the handsome, glossy, wrinkled, heavily veined, rich green foliage. As an extra bonus, these are followed by large, edible fruits that are as pretty as the flowers themselves. Resembling cherry tomatoes, the striking orangish-red rose-hips, provide a beautiful contrast against the foliage which turns golden-yellow or bronze in fall, adding interest and color to the fall garden. The rose hips may also be used to make jams and jellies. If left on the shrub, they might persist into winter to the delight of hungry birds who will feast on the large and colorful hips during the winter months.

Blooming occurs in early summer</strong> and gives way to sporadic blossoms up to the first frost.

Grows up to 4-6 ft. tall and wide (120-180 cm) on canes that are thickly covered with abundant sharp thorns. Unless restrained, this shrub rose will spread by suckers to form dense thickets over time.

Best grown in full sun to part shade, in humus-rich, moist</strong>, well-drained soils. Tolerant of poor soils, sandy soils, clay soils, salt and drought. Note that best flowering and disease resistance generally occur in full sun. Rugosa is one of the only roses that will survive and flower on on short water rations (they might not get as lush though). For best flowering, apply a balanced fertilizer and mulch in late winter or early spring and a balanced fertilizer again in early summer.

Enjoying a bushy, upright habit, this ravishing shrub is a superb addition to borders and creates lovely fragrant flowering hedges. Perfect as a specimen, for banks and cottage gardens. Give it some space so that its canes can soar or flop as they like, and enjoy their undisciplined habit. Because of its tolerance for salt and sand, this rose can be planted along ocean shores to help stabilize beaches and control beach erosion.

Do not remove spent flowers if you want to enjoy a beautiful crop of orange-red hips in fall and winter.

Unlike most garden roses, rugosas object to heavy pruning. When you use them in landscaping, anticipate the fully-grown bush size and let them grow.