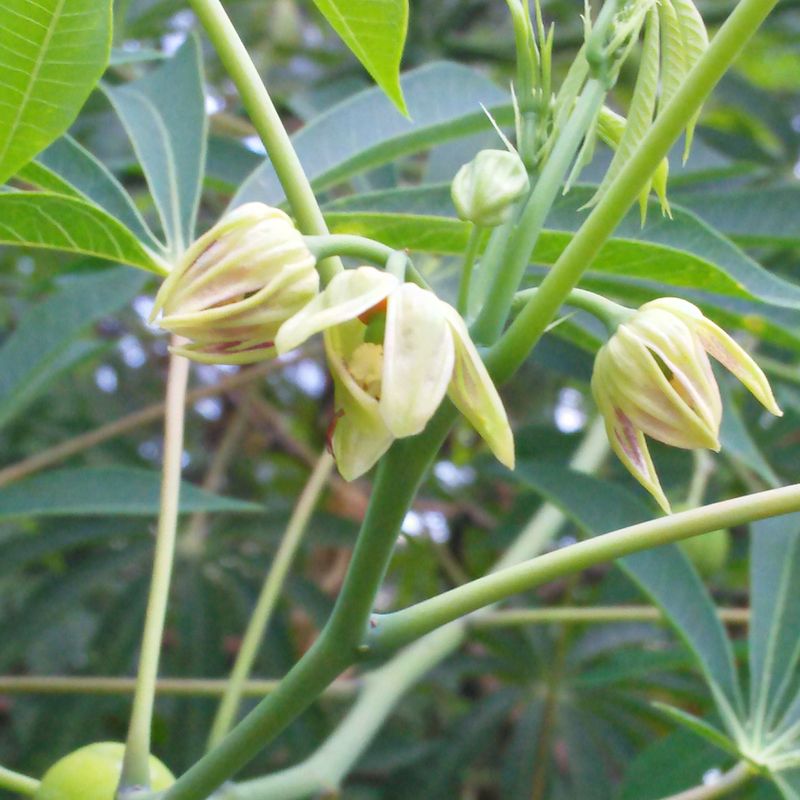 Hardy tapioca has foliage like a shefflera. The flowers are subtle but stylish, too; their interiors are colorful, but only at close range.  They're pendulous, and are appreciated best by bees, which adore them.  This plant's leaves have eleven leaflets. Manihot grahamii is an unusual and yet goes-with-anything tropical tree that, depending on where you grow it and how you choose to handle it, can thrive anywhere from Buenos Aires to Boston.  Being able to grow as a tree, or a shrub, or a die-back perennial is part of the secret of this plant's versatility.

What kind of plant is it?

Small tropical tree that, thanks to its ability to drop its leaves as well as resprout from oldest growth or even directly from the roots, can be grown in subtropical climates as a shrub and in warm-temperate climates as a woody perennial.  Evergreen only in frost-free climates.  Unusual hardiness is probably related, in part, to its ready deciduousity:  Manihot sheds it leaves for the "Winter" in climates where Winters are merely cool, not frosty.

Upright but with a quickly-widening canopy of branches and foliage because the tips of ascending stems don't simply send out side branches.  Instead, the tip stops vertical growth entirely as it ramifies into three or four secondary branches, each of equal vigor to the others, and all growing outward at only a modest upward angle.  Whether growing as a small tree, a shrub that experiences regular Winter dieback, or a multi-stemmed returning perennial whose woody stems die to the ground in Winter, Manihot grahamii will still have a characteristic small footprint but wide canopy.

Variable, depending on climate and culture.  If growing in a frost-free habitat, a small-boned tree to fifteen or even twenty feet.  Smaller and more shrubby when growing in climates where sub-freezing temperatures are typical.  At the cold end of its hardiness range, a woody perennial that regrows quickly to eight to ten feet each season.  Smaller still when grown permanently, year by year, in a container.  Manihot grahamii is fast-growing enough to be grown as an annual.

Lacy and open, thanks partly to the large but very laciniated palmate leaves, and also to the plant's habit of retaining them only at the tips of the quickly-growing branches.

its foliage: Round green leaves about six inches in diameter are composed of eleven narrow lobes, and look like the foliage of a miniature schefflera.

its fast growth: In a frost-free climate, Manihot can reach full size in a couple of years.  Even as a returning perennial in climates where it is killed back to the roots each Winter, it can soar eight to ten feet by September.

its appeal to bees:  Bees besiege the newly-opening flowers but, reportedly, for only about an hour on the morning of their first day of opening—and then vacate the plant for the day.  A large plant of Manihot grahamii that's heavy with blossom will be loudly buzzy for that hour, but silent the rest of the day.

its lack of appeal to browsers:  As is typical for Euphorbiaceae, Manihothas a sticky sap that makes the plant unpalatable.

its flexibility:  Depending on the climate and your choices in pruning—see "How to handle it" below—Manihot grahamii can grow in-ground or in a container as a small tree, a shrub, or a perennial.

I'm not aware of any named cultivars of Manihot grahamii.  There are about a hundred other Manihot species, from trees to shrubs to perennials.  The deeply-cut palmate leaves are typical, as is the sparse foliage canopy.  Only a couple of species—M. grahamii and M. esculenta—seem to have found their way into wide cultivation.  M. esculenta is a woody shrub grown world-wide as a food crop on account of its large starchy roots and protein-rich leaves.  The interior of each lobe of the leaves of M. esculenta 'Variegata' is a bright creamy-yellow; the petioles are red.  Variegated cassava is justly popular as an ornamental in tropical landscapes, and is on my wishlist as a specimen container plant.

On-line.  Where solidly hardy, anyone who grows the plant will gladly let you dig up seedlings.