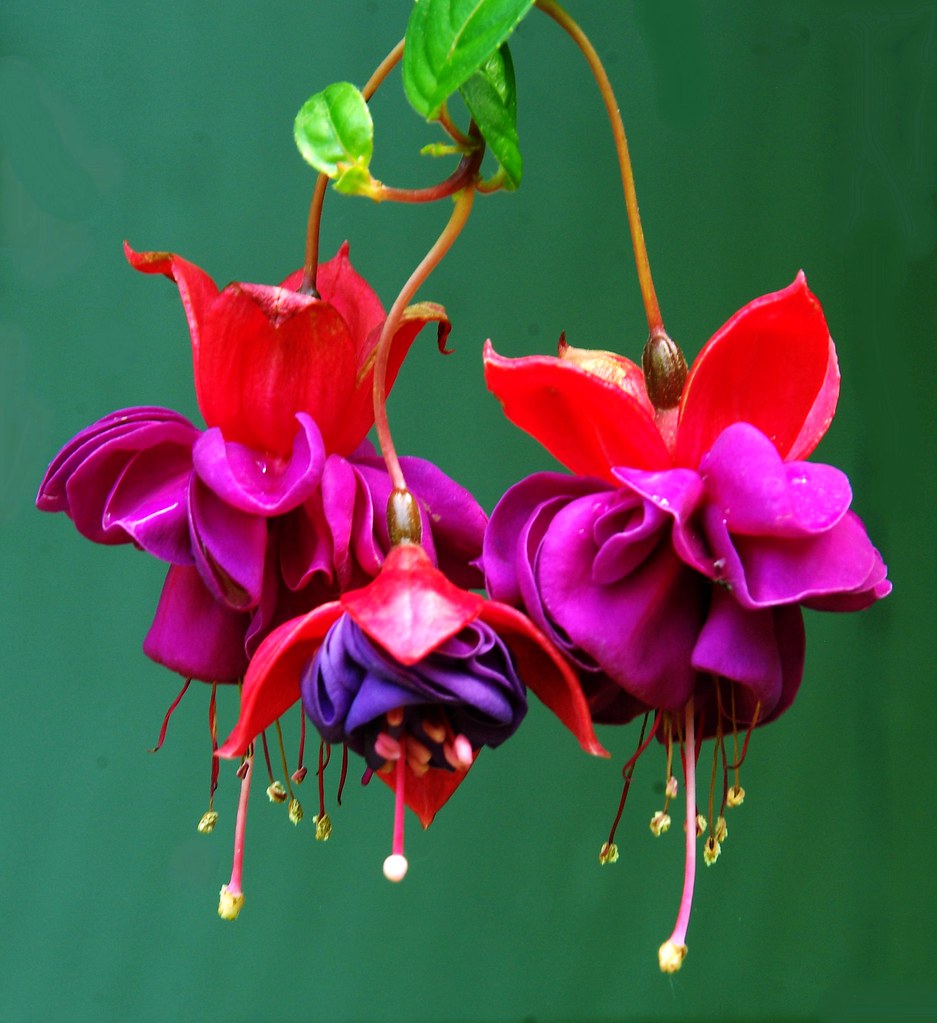 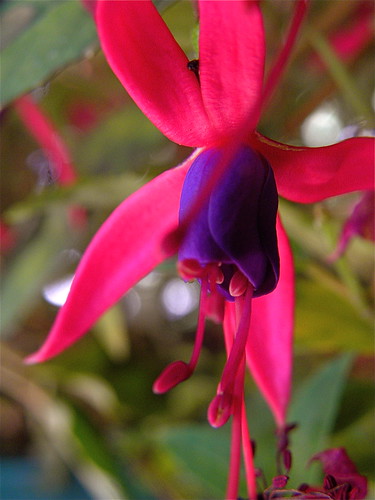 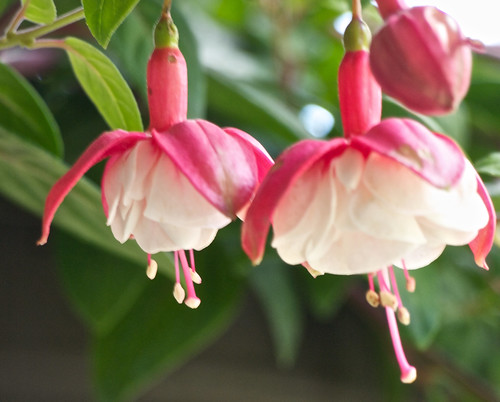 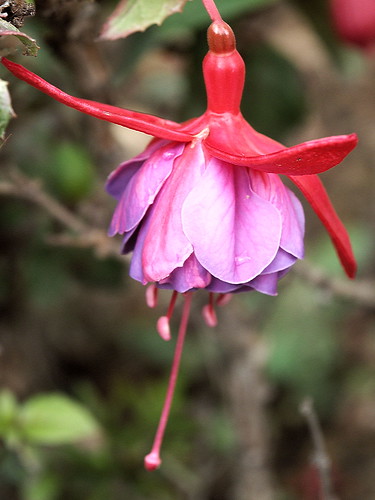 Fuchsia ( /ˈfjuːʃə/) is a genus of flowering plants that consists mostly of shrubs or small trees. The first, Fuchsia triphylla, was discovered on the Caribbean island of Hispaniola (Haiti and the Dominican Republic) about 1696–1697 by the French Minim monk and botanist, Charles Plumier, during his third expedition to the Greater Antilles. He named the new genus after the renowned German botanist Leonhart Fuchs (1501–1566).[2][3]

Almost 110 species of Fuchsia are recognized; the vast majority are native to South America, but a few occur north through Central America to Mexico, and also several from New Zealand to Tahiti. One species, F. magellanica, extends as far as the southern tip of South America, occurring on Tierra del Fuego in the cool temperate zone, but the majority are tropical or subtropical. Most fuchsias are shrubs from 0.2 to 4 m (8 in to 13 ft 1 in) tall, but one New Zealand species, the kōtukutuku (F. excorticata), is unusual in the genus in being a tree, growing up to 12–15 m (39–49 ft) tall.

Fuchsia leaves are opposite or in whorls of three to five, simple lanceolate, and usually have serrated margins (entire in some species), 1–25 cm long, and can be either deciduous or evergreen, depending on the species. The flowers are very decorative; they have a pendulous "teardrop" shape and are displayed in profusion throughout the summer and autumn, and all year in tropical species. They have four long, slender sepals and four shorter, broader petals; in many species, the sepals are bright red and the petals purple (colours that attract the hummingbirds that pollinate them), but the colours can vary from white to dark red, purple-blue, and orange. A few have yellowish tones. The ovary is inferior and the fruit is a small (5–25 mm) dark reddish green, deep red, or deep purple berry, containing numerous very small seeds.

The fruit of all fuchsia species and cultivars is edible, with the berry of F. splendens reportedly among the best-tasting. Its flavor is reminiscent of citrus and black pepper, and it can be made into jam. The fruits of some other fuchsias are flavorless or leave a bad aftertaste.[5]

The majority of Fuchsia species are native to Central and South America. A small additional number are found on Hispaniola (two species), in New Zealand (three species) and on Tahiti (one species). Philip A. Munz in his A Revision of the Genus Fuchsia classified the genus into seven sections of 100 species. More recent scientific publications, especially those by the botanists Dennis E. Breedlove of the University of California and, currently, Paul E. Berry of the University of Michigan, recognize 108 species and 122 taxa, organized into 12 sections. In New Zealand and Tahiti, section Skinnera now consists of only three species as F. × colensoi has been determined to be a naturally occurring hybrid between F. excorticata and F. perscandens. Also, F. procumbens has been placed into its own section, Procumbentes. Two other new sections are Pachyrrhiza and Verrucosa, each with one species. The Plant List, a cooperative endeavor by several leading botanical institutions to maintain a working list of all plant species, lists most currently accepted Fuchsia species and synonyms.[6]