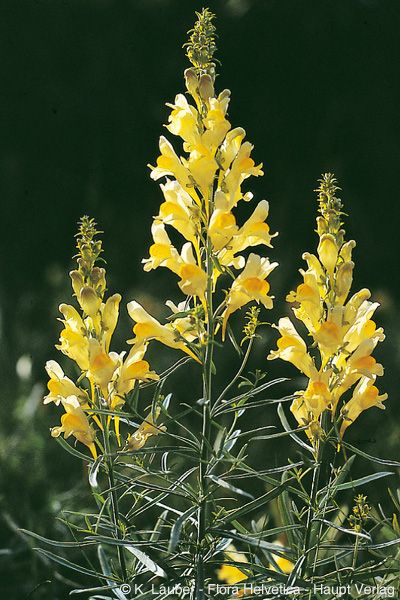 Linaria vulgaris (common toadflax,[1][2] yellow toadflax, or butter-and-eggs[3]) is a species of toadflax (Linaria), native to most of Europe and northern Asia, from the United Kingdom south to Spain in the west, and east to eastern Siberia and westernChina.[4][5] It has also been introduced and is now common in North America.[3]

It is a perennial plant with short spreading roots, erect to decumbent stems 15–90 cm high, with fine, threadlike, glaucous blue-green leaves 2–6 cm long and 1–5 mm broad. The flowers are similar to those of the snapdragon, 25–33 mm long, pale yellow except for the lower tip which is orange, borne in dense terminal racemes from mid summer to mid autumn. The flowers are mostly visited by bumblebees.[6] The fruit is a globose capsule 5–11 mm long and 5–7 mm broad, containing numerous small seeds.[2]

The plant is widespread on ruderal spots, along roads, in dunes, and on disturbed and cultivated land.[2]

Because the flower is largely closed by its underlip, pollination requires strong insects such as bees and bumblebees (Bombus species).[2]

While most commonly found as a weed, toadflax is sometimes cultivated for cut flowers, which are long-lasting in the vase. Like snapdragons (Antirrhinum), they are often grown in children's gardens for the "snapping" flowers which can be made to "talk" by squeezing them at the base of the corolla.[7]

The plant requires ample drainage, but is otherwise adaptable to a variety of conditions. It has escaped from cultivation in North America where it is a common naturalised weed of roadsides and poor soils; it is listed as aninvasive species in several U.S. states and Canadian provinces.[5][8][9]

Despite its reputation as a weed, like the dandelion, this plant has also been used in folk medicine for a variety of ailments. A tea made from the leaves was taken as a laxative and strong diuretic as well as for jaundice, dropsy, and enteritis with drowsiness.[citation needed] For skin diseases and piles, either a leaf tea or an ointment made from the flowers was used.[citation needed] In addition, a tea made in milk instead of water has been used as an insecticide. It is confirmed to have diuretic and fever-reducing properties.