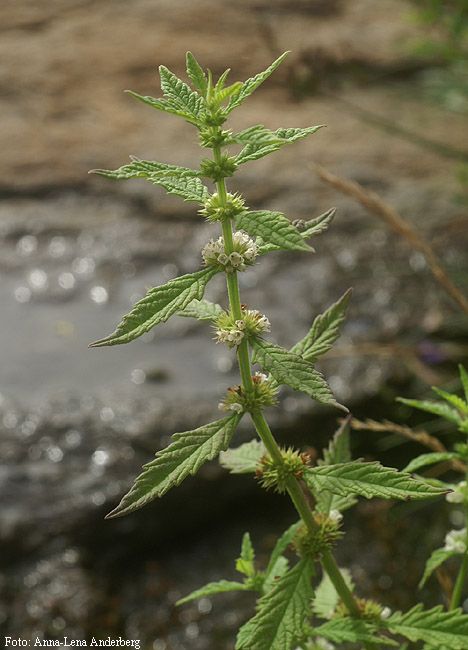 Gipsywort is a rather straggly perennial plant with slender underground runners and grows to a height of about 20 to 80 cm (8 to 31 in). The stalkless or short-stalked leaves are in opposite pairs. The leaf blades are hairy, narrowly lanceolate-ovate, sometimes pinnately-lobed, and with large teeth on the margin. The inflorescence forms a terminal spike and is composed of dense whorls of white or pale pink flowers. The calyx has five lobes and the corolla forms a two-lipped flower about 4 mm (0.16 in) long with a fused tube. The upper lip of each flower is slightly convex with a notched tip and the lower lip is three-lobed, the central lobe being the largest and bearing a red "nectar mark" to attract pollinating insects. There are two stamens, the gynoecium has two fused carpels and the fruit is a four-chambered schizocarp.[4] The flowers are visited by many types of insects, and can be characterized by a generalized pollination syndrome.[5]

Gypsywort grows primarily in wetland areas. It grows along the borders of lakes, ponds and streams and in marshes. Its carpels float which may aid dispersal of the plant and its rhizomeous roots also allow the plant to spread.[4] It is in flower from June to September, and produces seeds from August to October.

It is reputed to have medicinal qualities[6][7][8][9] and has been used by various peoples as an astringent, cosmetic, douche, narcotic and refrigerant.[citation needed] Several research studies have been undertaken on the properties of this plant.[vague][10]

The name gypsywort comes from the belief that Romani people would stain their skin with the juice of the plant, although Howard (1987) states that they used it to dye their linen.