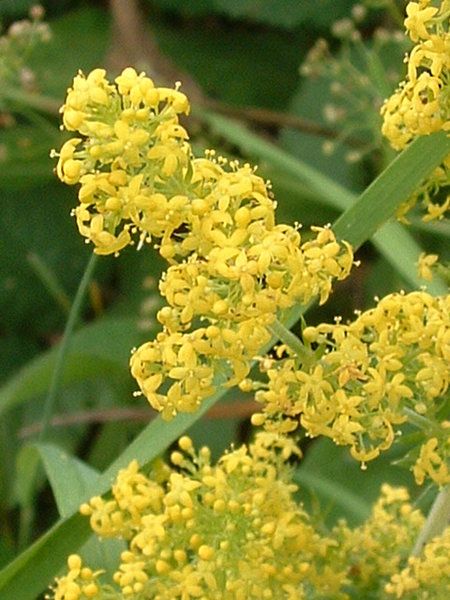 Galium verum (lady's bedstraw[1] or yellow bedstraw) is a herbaceous perennial plant of the family Rubiaceae. It is widespread across most of Europe, North Africa, and temperate Asia from Palestine and Turkey to Japan and Kamchatka. It is naturalized in Tasmania, New Zealand, Canada, and the northern half of the United States. It is considered a noxious weed in some places.[2][3][4]

In the past, the dried plants were used to stuff mattresses, as the coumarin scent of the plants acts as a flea killer. The flowers were also used to coagulate milk in cheese manufacture and, in Gloucestershire, to colour the cheese double Gloucester.[6] The plant is also used to make red madder-like and yellow dyes. In Denmark, the plant (known locally as gul snerre) is traditionally used to infuse spirits, making the uniquely Danish drink bjæsk.

Frigg was the goddess of married women, in Norse mythology. She helped women give birth to children, and as Scandinavians used the plant lady's bedstraw (Galium verum) as a sedative, they called it Frigg's grass.[7]

In Romanian folklore, it is called sânziana and it is linked to the Sânziene fairies and their festival on June 24.

Many varietal and subspecific names have been proposed, but only four are currently (May 2014) recognized:[2]