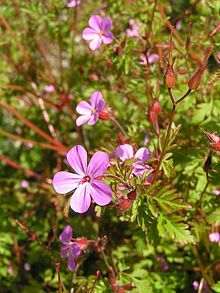 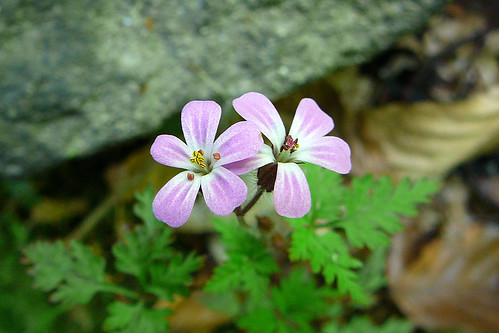 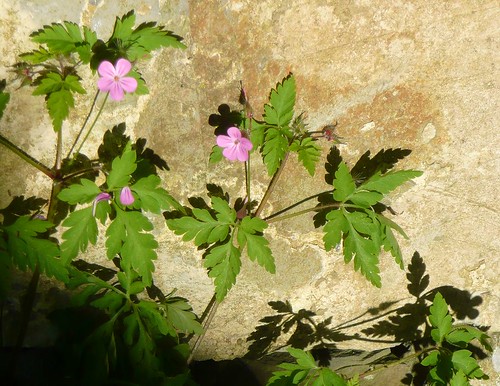 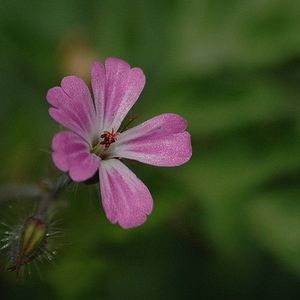 It grows as a procumbent to erect annual or biennial plant, up to 50cm high, producing small, pink, five-petalled flowers (8-14 mm in diameter)[2] from April until the autumn. The leaves are deeply dissected, ternate to palmate,[2][3] and the stems often reddish; the leaves too turn red at the end of the flowering season. The plant has little root structure.

It is common throughout Great Britain and Ireland in woodland, hedgerows, scree and maritime shingle.[2] Its main area of distribution is western Europe from the north Mediterranean coast to the Baltic.[1] It has been introduced into many other temperate parts of the world, probably through its use as an ornamental plant, such as in the San Francisco Bay Area in California. Geranium robertianum grows at altitudes from sea level to 710 metres (2,329 ft) in Teesdale, England and above 2,100 metres (6,890 ft) in parts of mainland Europe on calcareous alpine screes.[4]

In the state of Washington, it is known as Stinky Bob and classified as a noxious weed.

In traditional herbalism, Herb Robert was used as a remedy for toothache and nosebleeds[5] and as a vulnerary(used for or useful in healing wounds.) [6] Freshly picked leaves have an odor resembling burning tires when crushed, and if they are rubbed on the body the smell is said to repel mosquitoes.[6] The active ingredients are tannins, a bitter compound called geraniin, and essential oils. It was carried to attract good luck, and due to its analogical association with storks, to enhance fertility.