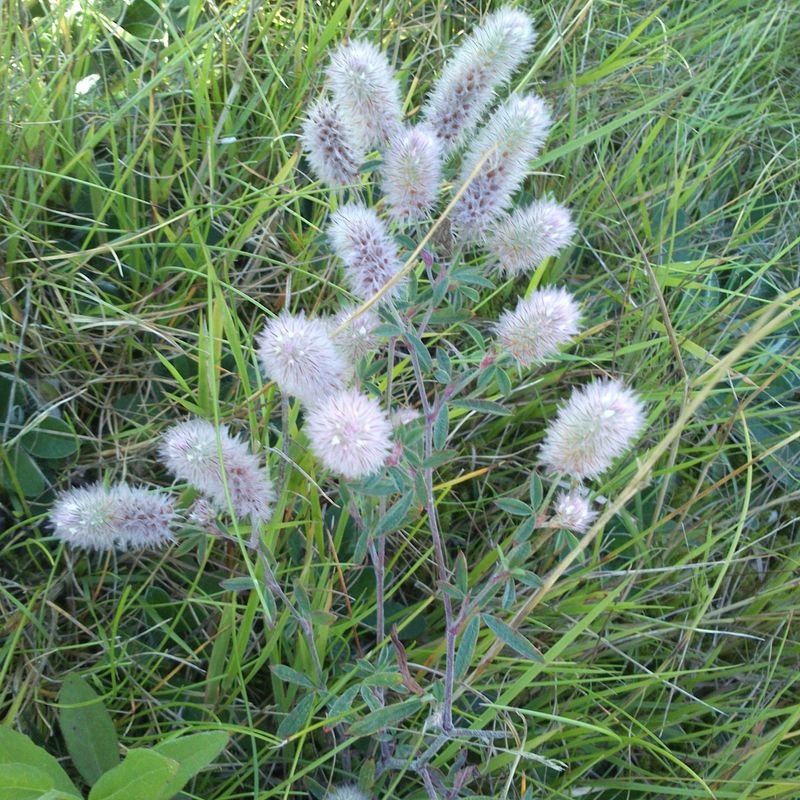 Trifolium arvense , commonly known as haresfoot clover,[1] rabbitfoot clover, stone clover or oldfield clover, is a flowering plant in the bean family Fabaceae. This species of clover is native to most of Europe, excluding the Arctic zone, and western Asia, in plain or mid-mountain habitats up to 1,600 metres (5,200 ft) altitude. It grows in dry sandy soils, both acidic and alkaline, typically found at the edge of fields, in wastelands, at the side of roads, on sand dunes, and opportunistically in vineyards and orchards when they are not irrigated.

It is a small erect herbaceous annual, or sometimes biennial plant, growing to 10–40 cm tall. Like all clovers, it has leaves divided into three sessile leaflets, which are slender, 1–2 cm long and 3–5 mm broad, and sometimes edged with small hairs and finely serrated. The leaves have a pair ofstipules at the base, often tipped in red. The flowers are grouped in a dense inflorescence 2–3 cm long and 1-1.5 cm broad; each flower is 4–5 mm long, rosy white in colour, and especially characterised by the many silky white hairs which tip the five sepals, which are much larger than the petals. These hairs, along with the more or less oblong form of the inflorescence, are the inspiration for the common name. Pollination is carried out by bees, or via autogamy, since the plant is hermaphroditic, and the flowering season is from mid-spring to late summer. The fruit is a small pod containing a single seed.

Like most legumes, it fixes nitrogen, making it valued on low fertility soils for the benefit it gives to other crop species in supplying nitrogen. It is also grazed by sheep and goats.

It has been introduced to North America, where it is an invasive species in some areas.