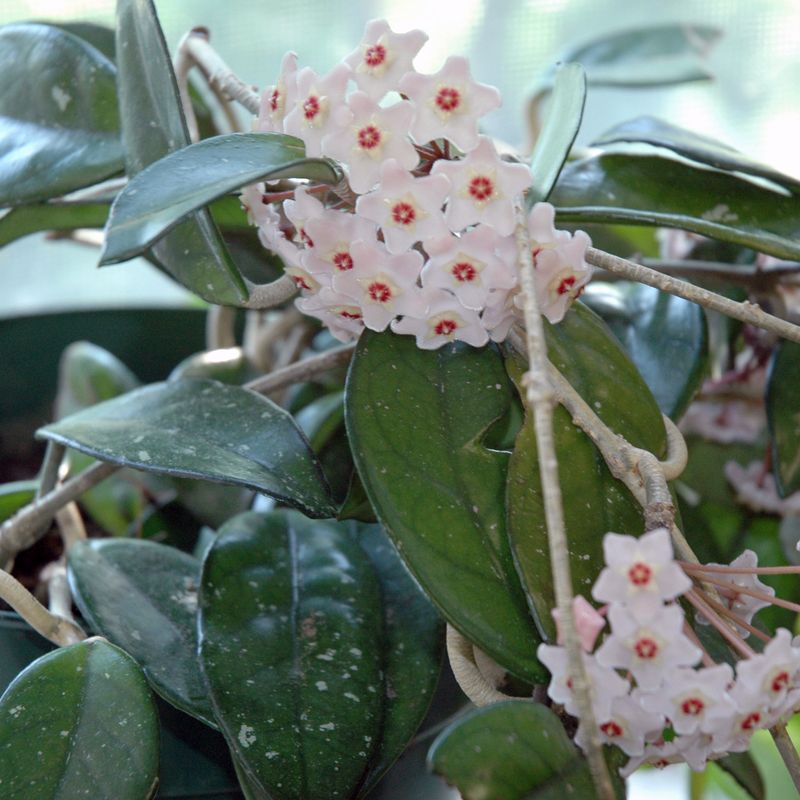 Hoya carnosa, the wax plant, is an Asclepiad species in the dogbane family (Apocynaceae). It is one of the many species of Hoya that are native to Eastern Asia and Australia. It is a common house plant grown for its attractive waxy foliage, and sweetly scented flowers.

The flowers are typically light pink, but may vary from near-white to dark pink; they are star-shaped, and are borne in clusters that look like tiny wax miniatures. The surface of the flowers are covered in tiny hairs giving a fuzzy sheen to them. They are heavily scented and may produce excess nectar that drips from the flowers. Like all Hoyas, this species flowers from specialized perennial structures referred to as spurs. These appear from the axils of the leaves and stem; flowers may not be produced when the spurs first appear, but in time buds emerge from the tips. Each season new flowers are produced on these same spurs, so they should not be damaged or removed.

H. carnosa has been in cultivation for more than 200 years and has given rise to many cultivars that vary in foliage form or flower color.

Recent studies at the University of Georgia have shown H. carnosa to be an excellent remover of pollutants in the indoor environment.

This Hoya species prefers bright light, but will tolerate much less. The optimal temperature is 60-85°F (16-30°C). It can be propagated by air layering or by stem cuttings.

The wax plant benefits from an open potting media that allows some air to get to the roots; typical mixes include large-grade drainage material such as perlite, pumice, or ceramic balls. The plants should be fed regularly with a fertilizer suitable for epiphytic plants.

There is a persistent bit of folklore that Hoyas prefer to be "potbound" - kept in a small pot. It is said that this will hasten flowering