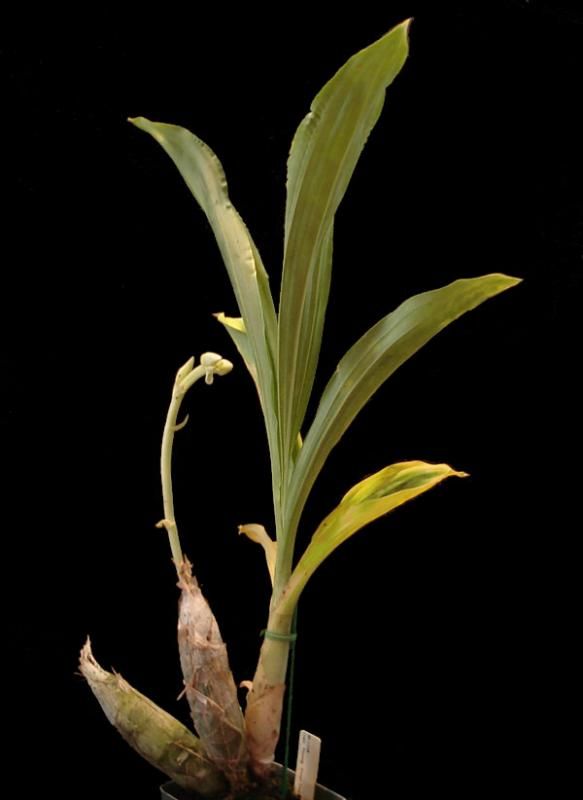 Catasetum, abbreviated as Ctsm in horticultural trade, is a genus of showy epiphytic Orchids, family (Orchidaceae), subfamily Epidendroideae, tribe Cymbidieae, subtribe Catasetinae, with 166 species, many of which are highly prized in horticulture.

Species of the genus Catasetum occur from Mexico to tropical America, with the majority in Brazil.

They have thick, cigar-shaped pseudobulbs which are clustered. The leaves are pleated in the upper part and deciduous. The pseudobulbs become spiny after the leaves have dropped.

The inflorescence is borne on the basis. It consists of very fleshy flowers that are unisexual, which is exceptional for orchids. The colorful male and yellowish-green female flowers are typically situated on different plants. Which type of flower a plant produces is determined by the conditions under which it grows.

There are rare cases in which a single plant in intermediate conditions will produce both male and female flowers. These flowers are markedly different in size and color. At first, taxonomists even thought they were dealing with different species, a puzzle which Charles Darwin resolved when writing Fertilisation of Orchids.[1][2]

The male flowers have a remarkable technique for the ejection of the pollinia. Sack-Shaped Catasetum (Catasetum saccatum), a tropical South American species, discussed by Darwin, actually launches its viscid pollen sacs with explosive force, when an insect touches a seta. He was ridiculed for reporting this by the naturalist Thomas Huxley.[3]

In habitat, these plants predominantly grow as epiphytes in very wet forests. Species of this genus all host wood devouring mycorhizzial fungi which supplement the plants nutrition by breaking down decomposing wood. Most of these species have a prolonged saprophytic stage in decomposing wood as seedlings before developing leaves and photosynthesis. Fungi which break down wood require a Nitrogen source since wood is primarily composed solely of hemi-cellulose, cellulose, and lignin and lacks nitrogen, and these plants are heavy feeders with high nitrogen requirements typically.