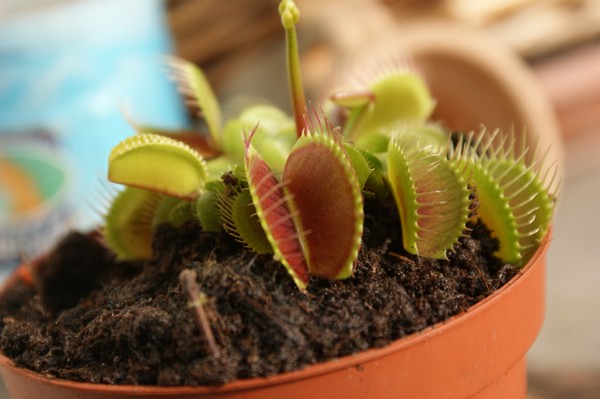 Strict adherence to the cultural needs of this plant is essential. Venus fly trap appears to be winter hardy to USDA Zones 7-10, but with adequate winter protection may also survive winters in USDA Zones 5 and 6. In residential areas where winter hardy, plants are best grown in the consistently moist soils of a bog garden. The bog garden should be prepared in advance of planting. In the St. Louis area, the bog garden should be sited in a protected location with a winter mulch in full sun to part shade. Bog gardens basically need an acidic, humusy, unfertilized, somewhat mucky soil that is constantly damp. Soils must never dry out. Plants flower in spring, produce new leaves (“traps”) in spring-summer and then mostly die back as winter approaches. Winter dormancy is usually triggered in fall when temperatures begin to fall below 50 degrees F as day lengths shorten. Soils should be mulched in winter with pine needles or leaves to protect the rhizomes from cold temperatures. If a bog garden is not available, the next best option may be to grow plants in pots/containers placed outside on a sunny deck or patio areas. Use a mixture of sand and peat moss. Containers should be placed in a tray of water that helps keep the soil constantly moist. It is best to use acidic rain water or distilled water. Containers may be overwintered by inserting them to the rim in soils in protected locations and then covered with mulch. Dig up containers in spring to place back in sunny areas. Containers may also be brought inside in fall for overwintering in a sunny but cool area (southern window) with temperatures of 40-50 degrees F. Plants may also be grown in terrariums where humidity and moisture can be controlled. Plants often do not grow well as houseplants. Propagate by division in spring.

Venus fly trap is perhaps the best known of the carnivorous plants that are native to the southeastern United States. It is native to coastal plain areas in southeastern North Carolina and eastern South Carolina (all within a 100 mile radius of Wilmington, N. C.), where it is typically found in sandy, acidic, boggy sites in marshlands, wet grasslands and savannas. Separate populations have naturalized in Florida and the New Jersey Pine Barrens. From a rhizome, this herbaceous perennial produces a low-growing rosette (to 5” tall and 8” wide) of up to eight bristly, spreading, basal leaves (each to 1-5” long), with each leaf (“trap”) being folded into two hinged lobes with bristly edges. Plant nectar lures insects into the trap. Each lobe has three sensitive trigger hairs. When an insect touches the trigger hairs, the trap slams shut imprisoning the insect until it dies and until subsequent digestion (enzymes are secreted by the leaves) takes place over the next 4-10 days. The trap then opens up in search of new prey. Cup-shaped, white flowers in umbels of 4-10 bloom in spring (May-June) on leafless stems rising well above the foliage to 12” tall. Fruits are egg-shaped capsules. Plants can be grown from seed, but it usually takes several years for them to develop. This is an endangered species which cannot be legally collected from the wild. It is also listed in Appendix II of the Convention on International Trade in Endangered Species (CITES).

Dionaea muscipula (common name - Venus Fly Trap) is probably the most commonly known and most intriguing of the carnivorous plants. It is the only species in the genus and has a limited range in the wild;moist to wet peaty and sandy areas in North and South Carolina, USA. Unfortunately, its endangered status does not stop collectors from risking high fines and field collecting them. Insect capture is performed by attracting the insects with nectar to bilobed leaves, which snap shut upon the prey.The speed with which this happens is quite astonishing (in the order of 0.1 second) and is quite spectacular when seen for the first time.The rapid movement of the trap is thought to be caused by a rapid change in water pressure whithin the leaf.The sealing of the leaf and subsequent opening later on is thought to be a growth phenomenon. It's colours attract insects also. The trap has 3-4 (occasionally more) trigger hairs on each side of the "V" shape, and if two or more of the hairs are touched, or a single hair touched more than once, the trap will quickly close - almost.

Pots - 3 - 5 inch
Compost - A 4:1 mixture of good quality sphagnum peat and washed coarse sand.Never use standard potting mix
Climate - temperate
Light - at best in full sun ,will also grow in bright shade
Water - sit in a tray of soft or rainwater water 1cm deep.
Propagation - Division of clumps,seed can be used to get large numbers but takes longer to get mature plants.
Notes - This plant stops growing in temperatures above approximately 33C so it won't do well in the tropics.Also it needs a winter dormancy (temperatures 0-14C) for long term health so is not a good indoor plant in most cases.The red forms are more suitable for hotter climates.