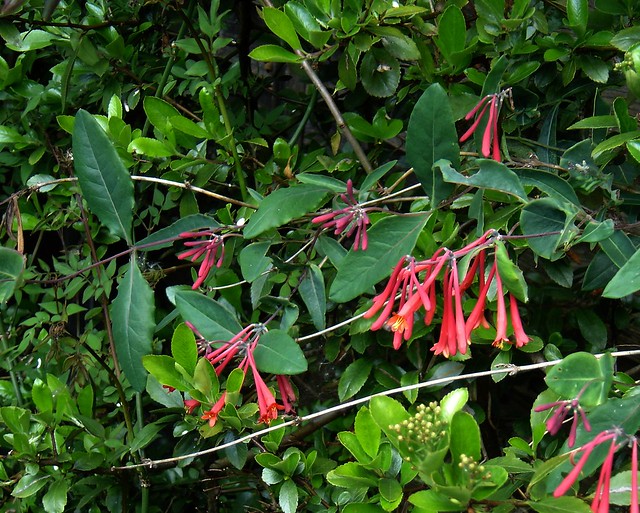 Easily grown in average, medium, well-drained soil in full sun. Tolerates shade, but the profuseness of flowering is inversely proportional to the amount of shade. Adapts to a wide range of soils. Prefers moist, loamy soils. Blooms primarily on previous year's stems, so prune to shape after flowering.

Trumpet honeysuckle is a vigorous, deciduous, twining vine which typically grows 10-15' (less frequently to 20') and is one of the showiest of the vining honeysuckles. Large, non-fragrant, narrow, trumpet-shaped flowers are scarlet to orangish red on the outside and yellowish inside. Flowers appear in late spring at stem ends in whorled clusters. Flowers give way to small red berries which mature in fall and are attractive to birds. Oval, bluish-green leaves are glaucous beneath. This vine is evergreen in the warm winter climates of the deep South, hence the species name of sempervirens (meaning "evergreen" in Latin). Trumpet honeysuckle has escaped cultivation and naturalized in some areas of central and southern Missouri.

This non-invasive, semi-evergreen, twining honeysuckle vine is noted for its showy, non-stop, spring-to-fall bloom of two-toned tangerine red trumpets that flare at the tips revealing golden throats. Flowers appear in whorled clusters and are very attractive to hummingbirds and butterflies. Flowers give way to orange-red berries that are attractive to birds. Native to the eastern U. S., this vine is a perfect companion for small arbors, trellises and fences. It typically grows to 8-15 feet long, and can be shaped and controlled with occasional trimming.