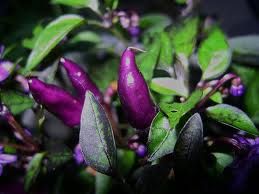 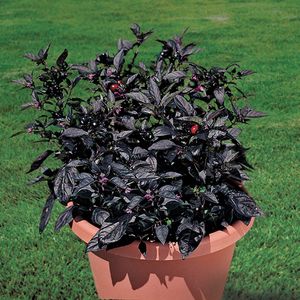 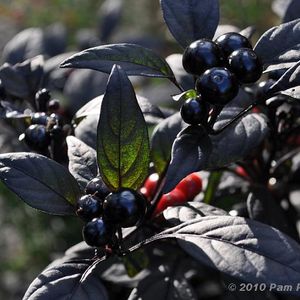 Ornamental peppers are the only summer annuals grown primarily for the attractiveness of their fruit. That, combined with their contrast of foliage and form, is what makes them popular in the summer garden.

Ornamental peppers grow into small bushes 12 to 18 inches high and as wide. Their dark green leaves are topped by bright-colored fruits that form in July and hold on the plant until frost. Depending on variety, fruits may be red, purple, yellow, or orange; the shapes range from conical to slim and tapered. There are even twisted forms. The small, white flowers that appear prior to the fruit are pretty but inconspicuous.

Growing ornamental peppers: Ornamental peppers prefer full sun in rich, well-drained soil and perform best in hot weather. They're remarkably drought-tolerant, but will grow better if watered when soil becomes dry. A slow-release fertilizer should be incorporated before planting. Plant when the soil is warm and the weather has settled down.

Ornamental peppers related varieties: Fireworks is a variety whose cream-colored, cone-shaped fruits turn a brilliant red. Holiday Cheers fruits start out cream-colored, then turn orange and bright red with all colors mixed on the plant. Holiday Flame, an F1[/sub] hybrid, has tapered, yellow fruit that turns red. Masquerade is another F1[/sub] hybrid with fruits that start out purple, then turn consecutively yellow, orange, and red.