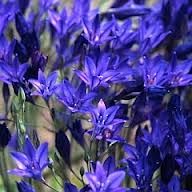 Brodiaea laxa is a triplet lily known by several common names, including Ithuriel's spear and grassnut. It is native to California where it is a common wildflower, and it is occasionally found in Oregon. It bears a tall, naked stem topped with a spray of smaller stalks, each ending in a purple or blue flower. The flower is tubular, opening into a sharply six-pointed star. The plant grows from a corm which is edible and similar in taste and use as the potato. The most used common name for the species, Ithuriel's spear, is a reference to the angel Ithuriel from Milton's Paradise Lost.