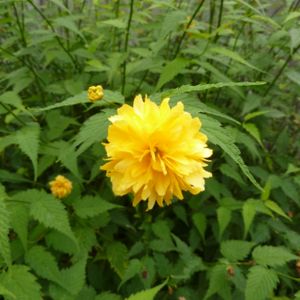 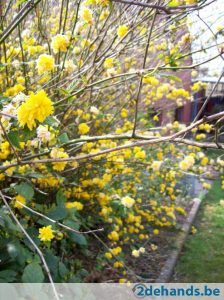 Kerria japonica 'Pleniflora' (Double kerria) is a bushy fully hardy perennial deciduous shrub with yellow flowers in early Spring and mid Spring. It grows well in shade and semi-shade, and prefers medium levels of water. The flowers are explosion shaped. It has high drought tolerance. It looks best in Spring.

Kerria japonica 'Pleniflora' grows in soils ranging from a pH of 4.5 (extremely acidic ranges from 0 to 5.1) to 8.5 (alkaline ranges from 8.1 to 8.5). It is adapted to chalk, clay, loam, peat and sand soils, and prefers low fertility.

Early-flowering shrubs are pruned after flowering (in late winter to spring and early summer, depending on the shrub).

They usually flower on the previous year’s growth. Pruning immediately after flowering allows the maximum time for development of young growth to provide the following year’s flowers before the end of summer.

Pruning requirements depend on the type of shrub, but all early-flowering shrubs need routine removal of damaged, diseased or dead wood, as follows:

After pruning, mulch and feed.