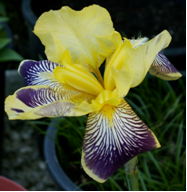 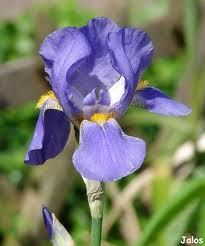 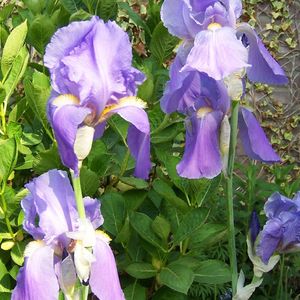 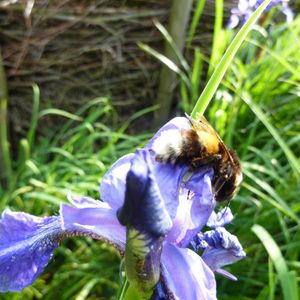 Best grown in humusy, medium moisture, well-drained soils in full sun. Best flowering and disease resistance occur in full sun. Plants will tolerate light shade. Good soil drainage is essential to combat potential soft rot problems. Avoid use of mulch for the same reason. Heavy clay soils such as those present in much of the St. Louis area must be amended prior to planting (e.g., add gypsum, coarse sand, organic matter) or raised plantings should be considered. Plant rhizomes shallowly (cover with 1/2” soil) and 12-24” apart in mid to late summer (July to early September). Fertilize lightly in early spring. Avoid overhead watering. Deadhead individual spent flowers and remove flowering stems to the ground after bloom. Divide plants immediately after flowering when overcrowding occurs (every 3-4 years).

Iris germanica, commonly called common flag or German iris, is the presumed father of most modern bearded iris cultivars. Origin is uncertain, but species plants are probably native to southern Europe and the Mediterranean area. This iris has become established over time throughout the world, with naturalization having occurred in many parts of Europe and the U. S. It is difficult to specifically describe German iris as a species because it appears in so many different forms. Thousands of bearded iris cultivars have been introduced into commerce over time. Iris germanica as a species is simply not sold in commerce today. In general terms, plants grow 2-3' tall with sword-shaped linear leaves and large usually fragrant blooms on stalks that branch below their mid points. Each flower has six perianth segments: three falls are purple with brown veins, white bases and yellow beards and three standards are lilac. Each stalk (to 3' tall) typically produces up to 6 flowers in spring. Sword shaped leaves are mostly basal, in two ranks, and about 2' long. German iris has no bulb. It spreads by creeping rhizomes which form large clumps over time. Thousands of bearded iris cultivars in a rainbow of different colors have been introduced over the years, with cultivars now classified into several different types: miniature dwarf (8" or less), standard dwarf (8-15 inches), intermediate (16-27 inches), miniature tall (16-25 inches but with small flowers), border (16-27 inches) and tall (28-38 inches).

The major insect pest of German iris is iris borer. Major disease problems are bacterial soft rot, crown rot fungus, and fungal leaf spot. Watch for mottling of leaves and flowers which may indicate the presence of mosaic virus. Good sanitation practices are the most important component of any disease/insect control program: promptly remove and destroy diseased foliage/rhizomes, promptly remove and destroy borer-infected foliage/rhizomes and perform an annual clean-up of all debris and foliage from beds in fall after frost. The most frequent causes of failure to flower or sparse flowering are (1) rhizomes are planted too deep, (2) plants are located in too much shade, (3) plants were given too much fertilizer or (4) plants have become overcrowded and need division.

Sunny beds and borders. Will naturalize into large clumps.