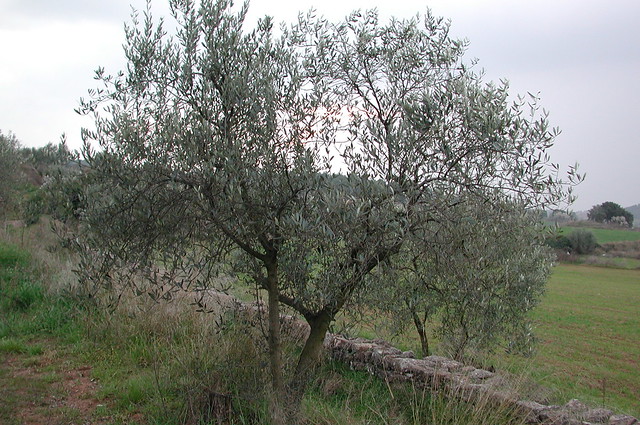 The olive tree, Olea europaea, is an evergreen tree or shrub native to the Mediterranean, Asia and Africa. It is short and squat, and rarely exceeds 8–15 metres (26–49 ft) in height. The silvery green leaves are oblong, measuring 4–10 centimetres (1.6–3.9 in) long and 1–3 centimetres (0.39–1.2 in) wide. The trunk is typically gnarled and twisted.

The small white, feathery flowers, with ten-cleft calyx and corolla, two stamens and bifid stigma, are borne generally on the previous year's wood, in racemes springing from the axils of the leaves.

The fruit is a small drupe 1–2.5 centimetres (0.39–0.98 in) long, thinner-fleshed and smaller in wild plants than in orchard cultivars. Olives are harvested in the green to purple stage. Canned black olives may contain chemicals (usually ferrous sulfate) that turn them black artificially.

Olea europaea contains a seed commonly referred to in American English as a pit or a rock, and in British English as a stone.

Marked preference for calcareous soils, flourishing best on limestone slopes and crags, and coastal climate conditions. They grow in any light soil, even on clay if well drained, but in rich soils they are predisposed to disease and produce poorer oil than in poorer soil.

Olives like hot weather, and temperatures below −10 °C (14 °F) may injure even a mature tree. They tolerate drought well, thanks to their sturdy and extensive root system.

Olives grow very slowly, and over many years the trunk can attain a considerable diameter. A. P. de Candolle recorded one exceeding 10 metres (33 ft) in girth. The trees rarely exceed 15 metres (49 ft) in height, and are generally confined to much more limited dimensions by frequent pruning.

Where the olive is carefully cultivated, as in Languedoc and Provence, the trees are regularly pruned. The pruning preserves the flower-bearing shoots of the preceding year, while keeping the tree low enough to allow the easy gathering of the fruit. The spaces between the trees are regularly fertilized. The crop from old trees is sometimes enormous, but they seldom bear well two years in succession, and in many cases a large harvest occurs every sixth or seventh season.

Olive trees can live for several centuries, and can remain productive for as long if they are pruned correctly and regularly.

Olives are harvested in the autumn and winter. More specifically in the Northern hemisphere, green olives are picked at the end of September to about the middle of November. Blond olives are picked from the middle of October to the end of November and black olives are collected from the middle of November to the end of January or early February. In southern Europe, harvesting is done for several weeks in winter, but the time varies in each country, and with the season and the cultivar.
Most olives today are harvested by shaking the boughs or the whole tree. Using olives found lying on the ground can result in poor quality oil. Another method involves standing on a ladder and "milking" the olives into a sack tied around the harvester's waist. A third method uses a device called an oli-net that wraps around the tree trunk and opens to form an umbrella-like catcher from which workers collect the fruit.

The yellow or light greenish-brown wood is often finely veined with a darker tint; being very hard and close-grained, it is valued by woodworkers.