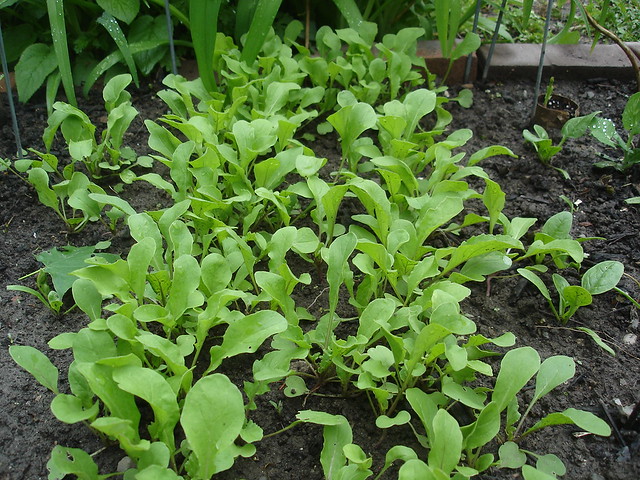 Salad rocket grows 20–100 centimetres (8–39 in) in height. The leaves are deeply pinnately lobed with four to ten small lateral lobes and a large terminal lobe. The flowers are 2–4 cm (0.8–1.6 in) in diameter, arranged in a corymb in typical Brassicaceae fashion; with creamy white petals veined with purple, and with yellow stamens; the sepals are shed soon after the flower opens. The fruit is a siliqua (pod) 12–35 millimetres (0.5–1.4 in) long with an apical beak, and containing several seeds (which are edible).

Vernacular names include salad rocket,[7] garden rocket, or simply rocket (British, Australian, Canadian, South African and New Zealand English), eruca, and arugula (American English). All English language names ultimately derive from the Latin word eruca, a name for an unspecified plant in the family Brassicaceae, probably a type of cabbage. In Arabic it is known as Gargeer (جرجير).Salad rocket typically grows on dry, disturbed ground. and is also used as a food by the larvae of some moth species, including the Garden Carpet moth. Arugula roots are also susceptible to nematode infestation.