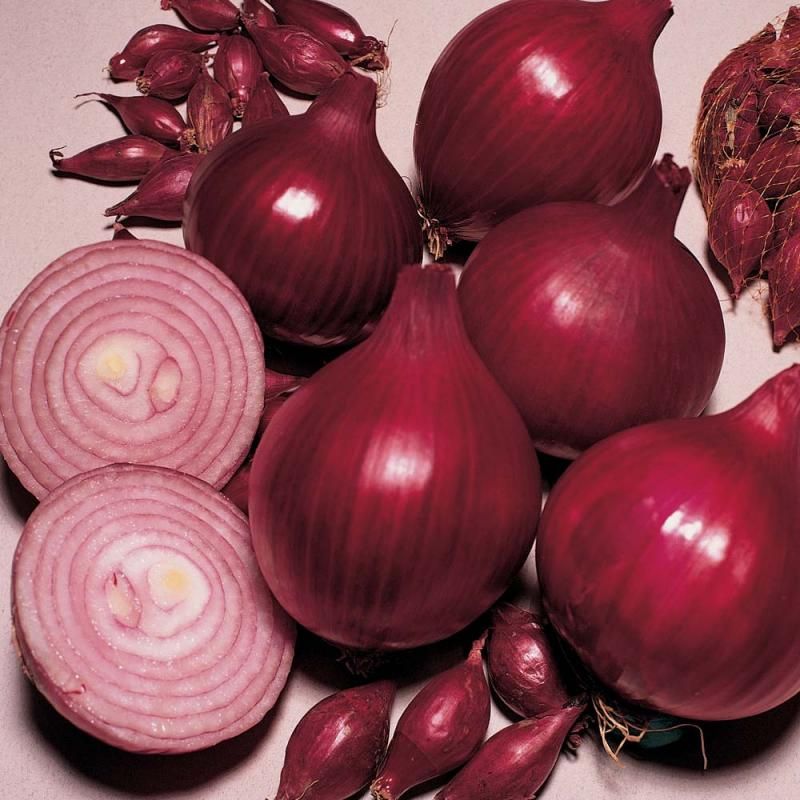 Bulbing onions can be used all year round, fresh from the garden or from a store. Yellow, red and white-skinned varieties are available, with more or less pronounced flavour and keeping ability. Varieties sown in spring (or earlier under glass) or grown from sets (small bulbs) are ready from late summer onwards and keep until late the following spring. Seed or set varieties started in late summer or early autumn stay in the ground over winter and mature in early summer after stored onions are used up - these varieties only keep until the new year. They grow best in a sunny site in rich but light soil that is relatively free-draining. They will tolerate a range of soil types.

You can plant 6" (15cm) apart each way or spaced at 4" (10cm) in rows 8"-12" (20-30cm) apart. Closer spacing produces smaller bulbs but there is no point going over 6" (15cm) apart unless you are trying to grow giants. Incidentally, large sets are more prone to bolting so do not discard small sets in the pack in favour of them.

Scrape a small hole or a drill to plant in, then backfill the soil. Just pushing the sets into the soil, especially a heavier soil, can damage the root plate and kill the set.

The biggest problem with sets are birds who like to pull them out of the soil. Netting or even cloching until established is advisable.

Another common problem with set grown onions is bolting. This is where the onion suddenly puts up a strong central stalk which carries a seed head. Effectively, cut off the stalk as soon as you see it developing and use those onions first.

Sowed as thinly as possible in rows about 9" apart, just under the surface the onions would be thinned out to the final spacing when they germinated and were 4" high. Just as with carrots, this thinning process releases the scent of the onions and like a guided missile, the onion fly's scent based radar would guide it to the crop.

The final spacing will depend on how large an onion you want to grow. Spacing at as little as 2" apart will result in small pickling size bulbs whereas 6" apart allows room for a very decent size of onion.

My preferred system for seed grown onions is to sow into 15 per tray modules. The benefits here are that you are immune to bad weather and don't need to thin out.

Starting in early March or even late February sow a couple of seeds per module into a multi-purpose compost and thin to one seedling as soon as possible if both germinate. They don't need to be too warm, between 10 and 15 degrees is fine.

Once germinated, do not let the temperature rise above 15 degrees or the onions will get confused about what time of year it is and bolt later after they're planted out. Move out of the greenhouse into a cold frame and harden off before planting out, spaced as for the sets. The beauty of this method is that the onions can be held if the weather is bad until you are ready to plant.

Sets are a little more tolerant than seed grpown onions of poor nutrient levels but add a general purpose fertiliser like fish, blood & bone or Growmore a week before you plant for best results.

Because high potash levels reduce the sulphur uptake, which is what causes the strong flavour of onions, if you use low potash fertilizer you will get smaller but tastier onions eventually. I use fish, blood and bone as above with a small amount of pelleted chicken manure to add a little nitrogen. The organic fertilizers release more slowly and evenly than chemical fertilizers.

Apart from some weeding, there is little to do. Do be careful not to damage the forming bulbs when hoeing. Better to have a few weeds or get on your knees and weed by hand than hoe out the crop before you start!

You can pull at any point for immediate use but for onions to store wait until the foliage is starting to bend over of its own accord. You will read in old books about bending the foliage over - do not do it because it causes damage to the neck causing problems in storage.

Just gently lever under the bulbs with a fork to break the roots and lift a few days later. Then dry them out for storage. The ideal is to place them on some sort of rack outdoors where air can flow all around them for a couple of weeks. If the weather is really wet you need to provide some sort of cover, the odd shower will not cause any harm though. Be careful about drying onions in a greenhouse. If it gets really hot then you end up starting to cook them and they won't store.

Once they have dried out, string them up and hang in a cool dark place. Check the base of the bulbs occasionally for rot starting and remove those bulbs to prevent it spreading.