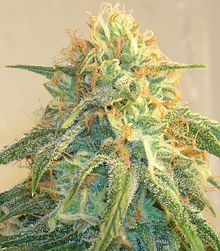 See warning at the bottom !

Its seed, chiefly used as caged-bird feed, is a valuable source of protein. The flowers (and to a lesser extent the leaves, stems, and seeds) contain psychoactive and physiologically active chemical compounds known as cannabinoids that are consumed for recreational, medicinal, and spiritual purposes. When so used, preparations of flowers (marijuana) and leaves and preparations derived from resinous extract (hashish) are consumed by smoking, vaporizing and oral ingestion. Historically, tinctures, teas, and ointments have also been common preparations.

The flowers of the female plant are arranged in racemes and can produce hundreds of seeds. Male plants shed their pollen and die several weeks prior to seed ripening on the female plants. Although genetic factors dispose a plant to become male or female, environmental factors including the diurnal light cycle can alter sexual expression.[citation needed] Naturally occurring monoecious plants, with both male and female parts, are either sterile or fertile but artificially induced "hermaphrodites" (a commonly used misnomer) can have fully functional reproductive organs. "Feminized" seed sold by many commercial seed suppliers are derived from artificially "hermaphrodytic" females that lack the male gene, or by treating the seeds with hormones or silver thiosulfate.

A Cannabis plant in the vegetative growth phase of its life requires more than 12–13 hours of light per day to stay vegetative. Flowering usually occurs when darkness equals at least 12 hours per day. The flowering cycle can last anywhere between nine to fifteen weeks, depending on the strain and environmental conditions.
In soil, the optimum pH for the plant is 6.3 to 6.8. In hydroponic growing, the nutrient solution is best at 5.2 to 5.8, making Cannabis well-suited to hydroponics because this pH range is hostile to most bacteria and fungi.
Cultivars primarily cultivated for their fiber, characterized by long stems and little branching.
Cultivars grown for seed from which hemp oil is extracted.
Cultivars grown for medicinal or recreational purposes. A nominal if not legal distinction is often made between industrial hemp, with concentrations of psychoactive compounds far too low to be useful for that purpose, and it is also known as marijuana.

Although the main psychoactive chemical compound in Cannabis is Δ9-tetrahydrocannabinol (THC), the plant is known to contain about sixty cannabinoids; however, most of these "minor" cannabinoids are only produced in trace amounts. Besides THC, another cannabinoid produced in high concentrations by some plants is cannabidiol (CBD), which is not psychoactive but has recently been shown to block the effect of THC in the nervous system.[1] Differences in the chemical composition of Cannabis varieties may produce different effects in humans. Synthetic THC, called dronabinol, does not contain CBD, CBN, or other cannabinoids, which is one reason why its pharmacological effects may differ significantly from those of natural Cannabis preparations.

The legality of cannabis has been the subject of debate and controversy for decades. Cannabis is illegal to consume, use, possess, cultivate, transfer or trade in most countries. Since the beginning of widespread cannabis prohibition around the mid 20th century, most countries have not re-legalized it for personal use, although more than 10 countries tolerate (or have decriminalized) its use and/or its cultivation in limited quantities. Medicinal use of cannabis is also legal in a number of countries, including Belgium, Canada, the Czech Republic, the Netherlands, Israel and 16 states of the United States.