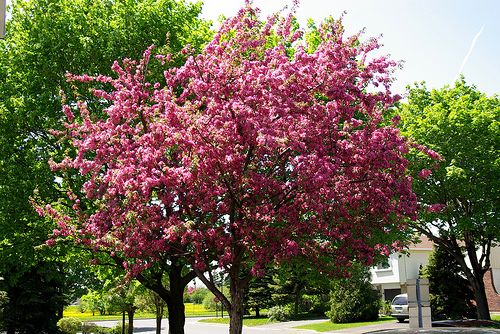 Apple trees are small, typically 4–12 m tall at maturity, with a dense, twiggy crown. The leaves are 3–10 cm long, alternate, simple, with a serrated margin. The flowers are borne in corymbs, and have five petals, which may be white, pink or red, and are perfect, with usually red stamens that produce copious pollen, and a half-inferior ovary; flowering occurs in the spring after 50–80 growing degree days (varying greatly according to subspecies and cultivar).

Apples require cross-pollination between individuals by insects (typically bees, which freely visit the flowers for both nectar and pollen); all are self-sterile, and (with the exception of a few specially developed cultivars) self-pollination is impossible, making pollinating insects essential.

The genus is native to the temperate zone of the Northern Hemisphere, in Europe, Asia and North America.

Crabapples are an excellent source of pectin, and their juice can be made into a ruby-coloured preserve with a full, spicy flavor.[5] A small percentage of crabapples in cider makes a more interesting flavour.[citation needed] As Old English Wergulu, the crab apple is one of the nine plants invoked in the pagan Anglo-Saxon Nine Herbs Charm, recorded in the 10th century.

Crabapples are widely grown as ornamental trees, grown for their beautiful flowers or fruit, with numerous cultivars selected for these qualities and for resistance to disease.