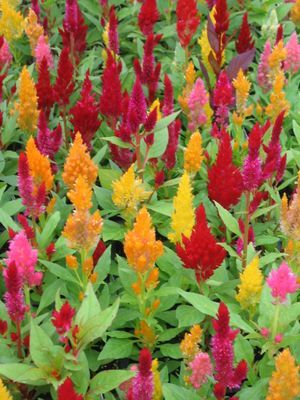 Celosia ( /siːˈloʊʃiə/) is a small genus of edible and ornamental plants in the amaranth family, Amaranthaceae. The generic name is derived from the Greek word κηλος (kelos), meaning "burned," and refers to the flame-like flower heads. Species are commonly known as woolflowers, or, if the flower heads are crested by fasciation, cockscombs. The plants are well known in East Africa’s highlands and are used under their Swahili name, mfungu.

Despite its African origin (a claim that is not without dispute), celosia is known as a foodstuff in Indonesia and India. Moreover, in the future it might become more widely eaten, especially in the hot and malnourished regions of the equatorial zone. In that regard, it has already been hailed as the often-wished-for vegetable that “grows like a weed without demanding all the tender loving care that other vegetables seem to need” says Martin Price of Florida. He continues "“Every place I have tried it, it grows with no work. We have had no disease problems and very little insect damage. It reseeds itself abundantly and new plants have come up in the immediate vicinity.”[4]

Works well in humid areas and is the most-used leafy plant in Nigeria. It grows in the wet season and grows well while other plants succumb to mold and other diseases like mildew. Celosia though a very simple plant does need moderate soil moisture.

Medicinal:  It is used as a treatment for intestinal worms (particularly tapeworm), blood diseases, mouth sores, eye problems. The seeds treat chest complaints and the flowers treat diarrhea. The leaves are used as dressings for boils and sores, and the boiled vegetables are said to be slightly diuretic.

As a garden plant:  Seed production in these species can be very high, 200–700 kg per hectare. One ounce of seed may contain up to 43,000 seeds. One thousand seeds can weigh 1.0-1.2 grams. Depending upon the location and fertility of the soil, blossoms can last 8–10 weeks.

Celosia cristata is a common garden ornamental plant in China and other places.

As food:  Celosia argentea var. argentea or Lagos spinach (a.k.a. quail grass, Soko, Celosia, feather cockscomb) is a broadleaf annual leaf vegetable. It grows widespread across Mexico, where it is known as "Velvet flower", northern South America, tropical Africa, the West Indies, South, East and Southeast Asia where it is grown as a native or naturalized wildflower, and is cultivated as a nutritious leafy green vegetable. It is traditional fare in the countries of Central and West Africa, and is one of the leading leafy green vegetables in Nigeria, where it is known as ‘soko yokoto’, meaning "make husbands fat and happy".[3] In Spain it is known as "Rooster comb" because of its appearance.

As a grain, Cockscomb is a pseudo-cereal, not a true cereal.

These leaves, young stems and young inflorescences are used for stew, as they soften up readily in cooking. The leaves also have a soft texture and has a mild spinach-like taste. They are also pepped up with such things as hot pepper, garlic, fresh lime, and red palm oil and eaten as a side dish.