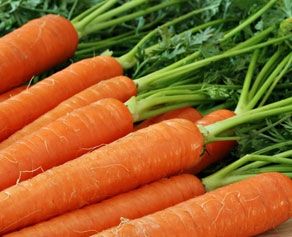 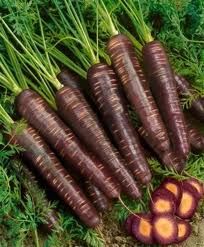 The carrot (Daucus carota subsp. sativus, Etymology: from Late Latin carōta, from Greek καρότον karōton, originally from the Indo-European root ker- (horn), due to its horn-like shape) is a root vegetable, usually orange in colour, though purple, red, white, and yellow varieties exist. It has a crisp texture when fresh. The most commonly eaten part of a carrot is a taproot, although the greens are edible as well. It is a domesticated form of the wild carrot Daucus carota, native to Europe and southwestern Asia. The domestic carrot has been selectively bred for its greatly enlarged and more palatable, less woody-textured edible taproot.

It is a biennial plant which grows a rosette of leaves in the spring and summer, while building up the stout taproot, which stores large amounts of sugars for the plant to flower in the second year. The flowering stem grows to about 1 metre (3 ft) tall, with an umbel of white flowers that produce a fruit called a mericarp by botanists, which is a type of schizocarp.