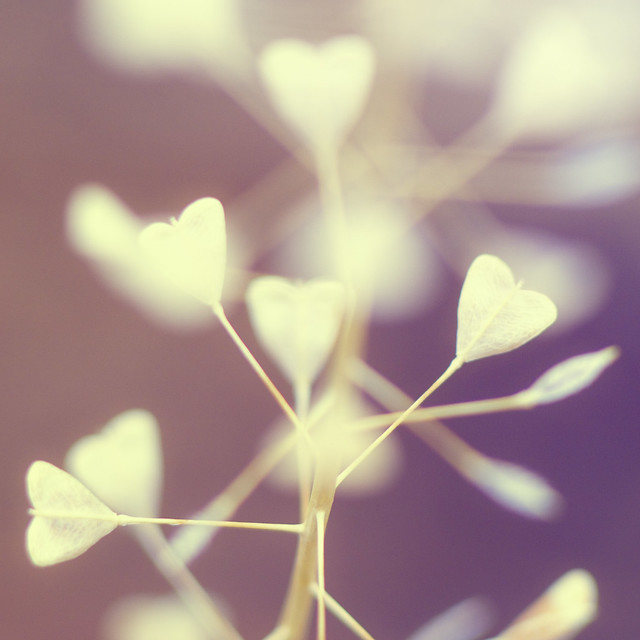 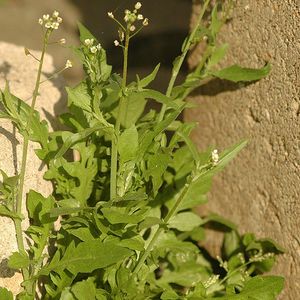 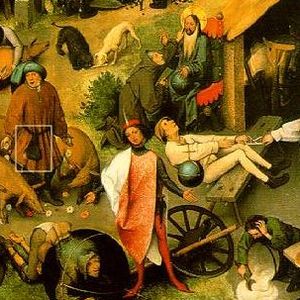 Capsella bursa-pastoris, known by its common name shepherd's-purse because of its triangular, purse-like pods, is a small (up to 0.5 m) annual and ruderal species, and a member of the Brassicaceae or mustard family. It is native to eastern Europe and Asia minor[1] but is naturalized and considered a common weed in many parts of the world, especially in colder climates,[2] including Britain, where it is regarded as an archaeophyte,[3][4] North America[5][6] and China[7] but also in the Mediterranean and North Africa.[1] Capsella bursa-pastoris is closely related to the model organism Arabidopsis thaliana and is also used as a model organism due to the variety of genes expressed throughout its life cycle that can be compared to genes that are well studied in A. thaliana. Unlike most flowering plants, it flowers almost all year round.[6][7] Like many other annual ruderals exploiting disturbed ground, C. bursa-pastoris reproduces entirely from seed, has a long soil seed bank,[3] and short generation time[1] and is capable of producing several generations each year.

C. bursa-pastoris plants grow from a rosette of lobed leaves at the base. From the base emerges a stem about 0.2 to 0.5 m tall, which bears a few pointed leaves which partly grasp the stem. The flowers are white and small, in loose racemes, and produce seed pods which are heart-shaped.[6]

Like a number of other plants in several plant families, its seeds contain a substance known as mucilage, a condition known as myxospermy.[8] The adaptive value of myxospermy is unknown,[8] although the fact that mucilage becomes sticky when wet has led some to propose that C. bursa-pastoris traps insects which then provide nutrients to the seedling, which would make it protocarnivorous.[9]

C. bursa-pastoris is gathered from the wild[10] or grown[11] for food,[7][11] to supplement animal feed,[10] for cosmetics,[10] and for medicinal purposes.[7][10] It is commonly used as food in Shanghai and the surroundingJiangnan region, where they are stir-fried with rice cakes and other ingredients or as part of the filling in wontons.[citation needed] It is one of the ingredients of the symbolic dish consumed in the Japanese spring-time festival, Nanakusa-no-sekku. In Korea it is known as naengi and its roots are one of the ingredients of the characteristic Korean dish, namul (fresh greens and wild vegetables).[12]

Capsella bursa-pastoris herb has been used in the traditional Austrian medicine internally as tea or tincture, or externally as tincture, tea or ointments, for treatment of disorders of the skin, locomotor system, cardiovascular system, hemostasis, and gynaecologic problems.[13]

Fumaric acid is one chemical substance that has been isolated from C. bursa-pastoris.[14]