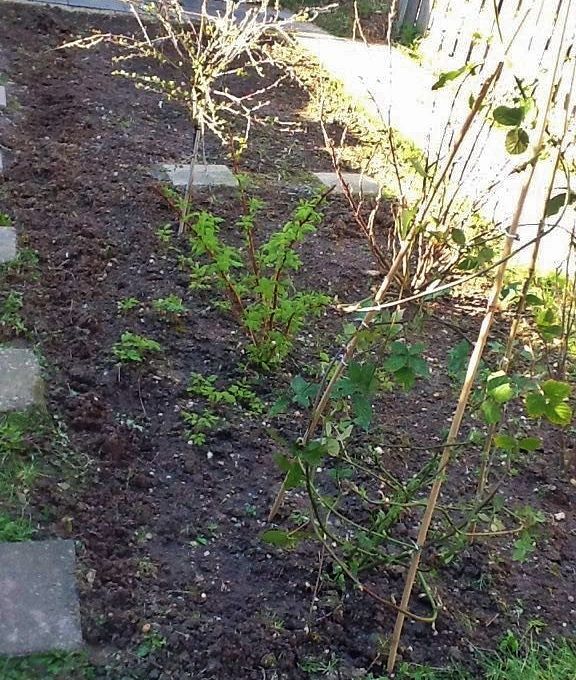 Finally, we've managed to grow something for more than 4 weeks.!! \o/ The blackberry bush is strong and healthy and on it's second season of fruit production, as is the raspberry bush. The Gooseberry bush starts it's third season, and already there are fruit buds on it's thorny branches. The blackcurrant bushes are still going strong and despite re-planting the slightly smaller one and witnessing a major decline in it's health for a few weeks, it has come back strong and already budding.

Buddy Jr. has been joined by a 'summer lilac' buddleia who seems to have come from seedlings blown in the wind. He also has another little 'dark knight' friend who we believe has come from his seedlings. All three are doing well and establishing themselves as 'royalty' in the garden. They have competition, as the big guy and I saw some gorgeous bright blue ''Queen Fabiola' lily bulbs in the garden centre last week, and some 'Eyeliner' and 'Queen of the Night' Asian lily bulbs that were on sale, so we bought one of each and they are now cosy and warm in the garden.

If they come up as bright as the picture suggests, they are going to be breath-taking.! I'm a little concerned about the Acer though... it's never been the huge, wide spreading blaze of crimson fire it promised to be and now it's not even budding.. I've put it in the sun and made sure it's safe and has the right compost, but it still seems to be a little slow on the uptake. Susan has returned and Phoebe has started to bud, so I'm happy.

While at the garden centre, we decided to find some new garden babies to climb up the lattice on the patio.. the clematis is behaving like a bored teenager and gripes and whinges about every tiny little bud it's being forced to produce.. I figure a honeysuckle giving it a run for it's money might make it buck up. The big guy is trying again with a Ceanothus... he refuses to be beaten... so has bought a climbing version to see how that fares... hopefully the honeysuckle will buck it up a little too.

The hydrangea is doing next to nothing... there is greenery and a few floral buds, but they're doing nothing, as they did all last year too... I'm hoping it's one of those 'give it time' plants that improves a little every year and grows a little more. The big guy thinks I'm nuts to wait for it to do something he doesn't believe it will do, and it's true I'm not really an optimist, but I'm prepared to give it a little more time. We were given a small packet of purple poppy seeds, so they've gone out in between the fruit bushes, to mix with the Californian poppies that have decided to set up home since we introduced them two years ago via a mixed wild flower sachet.

Wild strawberries are desperately trying to take over, only to be pushed back by the big guy ripping them up and taking back the land they've invaded. I wish I could get rid of them without killing anything else, but it seems impossible. Although we may have to re-think the garden anyway when we start the process of getting a dog later this year.