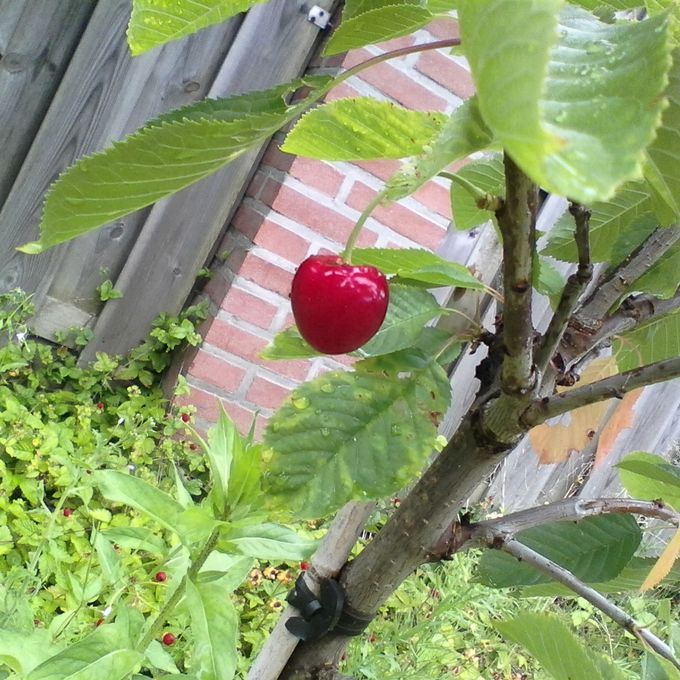 We appear to have an unexpected ability to grow fruit... thankfully, because we can't grow anything else effectively. This season we have been blessed with 1.5kg of gooseberries, 400g of blackcurrants, a cherry and a handful of raspberries. The blackberry bush is flowering, so we may yet see a few berries there too. Finally we have become productive.! :) The lone cherry is a massive bonus, as we've only had the cherry tree, pear tree (unproductive as yet), blackberry and raspberry bushes for a few months and we didn't expect any fruit for at least a year or two.

The rhubarb is looking a little the worst for wear, but it too is still producing some fine red stalks. I am so pleased that something is finally working in that desert of a garden, despite the bugs best efforts. The birds are happily using it as a playground, which is wonderful, bathing in the dirt under the berry bushes, hiding in the undergrowth around Buddy Jr. who this year has topped 13 feet in height, and playing on the patio, inching closer and closer to the back door as they investigate 'their' territory.

We now seem to be the only garden in this block not paved over to a high degree. The new neighbours moved in two doors away and immediately dug everything up and paved the garden from end to end, it was devastating to watch as the little old lady who'd lived there before had sculpted a beautiful bird and insect friendly haven of gorgeous flowers and shrubs. Humans really do suck sometimes.

The Acer has yet again died off. I have no idea what it's doing but every Spring it starts to grow new leaves and every summer it dies back, and that's it until the next Spring. The same Acer's across the neighbourhood are full, and bright and basking golden red in the sunlight while our's tries to hide and I swear it's hibernating. The clematis went a bit crazy this year with 13 flowers blooming.. a record.! Last year we had one flower, the year before 3.. it'll probably die now having exhausted itself. The wisteria out front has made it across the front of the house to the bathroom window, and insistently tries to climb in through our bedroom window, thwarted only by my vigilance and constant demands that it get it's own room. It occasionally still flowers.