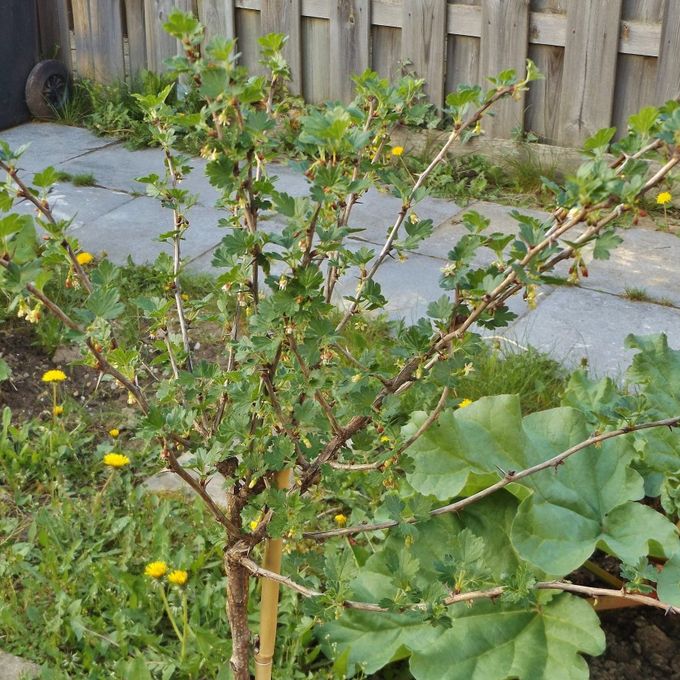 After a mild Winter, and the beginning of a somewhat conservative Spring, we took stock of the garden babies, and went to see what had survived and what had not. The patio tubs had been kept on the patio, but moved under the porch, so the worst of the weather (and the frost) could not touch them. Although Connie was determined to be dead in the autumn, we left her over the Winter to see if she would deign to push a bud come the warmer Spring weather, but no, she has definitely passed, and the Ceanothus bush we bought in the autumn and kept in a big patio tub, seems to be going the same way. We really don't have a lot of luck with Ceanothus'. :( The grapevine that looked so promising last summer, has also died.

On a lighter note, the Acer we thought had been scorched to death, has come back to life and is flourishing in its pot on the patio, as is the Clematis, for a third year running. This may well be a record.! The rhubarb has gone mad again, with huge leaves and lovely red stems already, and the berry bushes are getting leafy and showing early buds. The ivy in the front has gained ground and started climbing, and the wisteria's throwing out blooms like she just doesn't care and trying to climb in the bedroom window from the other direction... sneaky little madam.

Buddy Jr. in his excitement to welcome Spring, began pushing out buds and leafing like it was mid-summer, and got caught by a late frost. He drooped like a told-off school boy, with all that beautiful green going limp and turning grey. Thankfully he's bucked up a bit and is pushing out leaves again... cautiously I might add... he won't be fooled again. We have a few new additions to our little garden, a Hortensia we were given by the big guy's step-Dad that happens to be pale pink, but we've put some copper coins in the soil near the roots, so hopefully that'll help change the colour (I HATE pink) and a Magnolia called Susan, who is a beautiful shade of cerise and blooming nicely, despite having only been with us three days.! We also have a Hinnonmaki Green gooseberry bush, which is already growing tiny berries. :)