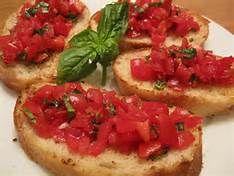 I just used some fresh basil from my yard. I also have tomatoes ripening. I forgot to buy frozen pizza for Friday, thus I combined some sour-dough bread, brushed it with olive oil, then topped the bread with diced tomatoes,  diced onions onions, cut-up basil, grated parmasan cheese and a sprinkle of diced ham on each toast. I baked it for about 10 minutes in the oven at 350 degress F. It was pretty good. Later in went on the internet and found some easy, great recipes. I learned that people use garlic instead of onions. It was a success for an improvised meal!

(Picture of Bruchetta from Google Images.)

Now I am learning to be a gardener.