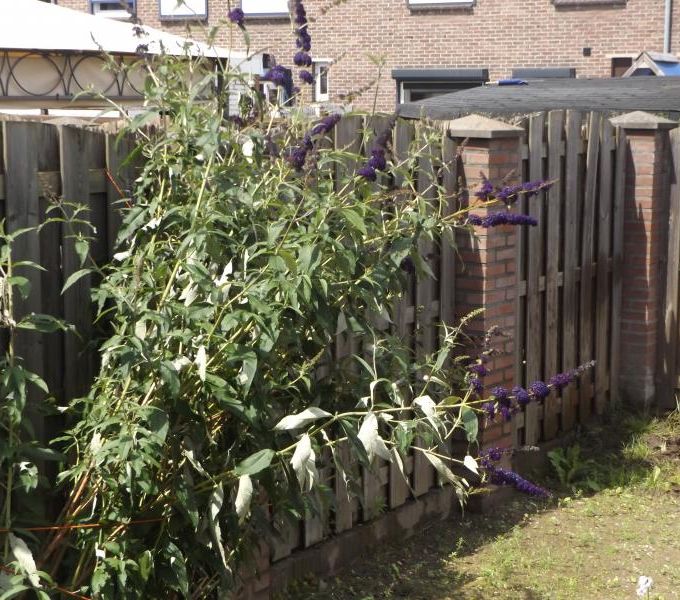 As if my poor buddleia's haven't been through enough.. with frost bite, bug invasions and children. The tail-end of the HUGE storm to hit the Netherlands 2 weeks ago almost did for them both. Poor Buddy Jr. the tall 'Black Knight' was left uprooted and smashed by jet powered rain and gale force winds that looked like the monsoon's you see on TV. His stalks were broken, leaves were full of holes and all his new blooms were obliterated. Blossom, the 'Lilac Chip' only recently transferred from the garden (being in Buddy Jr.'s shade) to a big pot all to herself, was picked up and thrown over the garden wall, and broken in half, her new blooms also being obliterated by the rain. For a few days it was touch and go as to whether they would make it. Buddy Jr. had to be carefully dug up, and re-planted in a bigger, deeper hole, and tied back because he just wasn't strong enough to hold himself upright, and Blossom, once again, was re-potted and given some new compost to try and aid her recovery.

Two weeks on, despite constant rain and more strong winds, with very little sunshine, both Buddy Jr. and Blossom have made quite surprising recoveries, and are going from strength to strength. Buddleia's might be a hardy shrub, but I think mine are hardier than most.