Wisteria – famous recently for being the name of the lane that the Desperate Housewives live on, has had an even more glamorous incarnation.

Claude Monet (1840-1926) was the archetypal impressionist. In fact, his ‘Impression, Sunrise’ (1872) gave the Impressionist movement its name. Wisteria was a subject for Claude Monet and the garden at Giverny is home to the Japanese bridge which is covered in Wisteria plants.

Monet wanted the blooming effect to last so he planted a White Wisteria plant to follow when the Purple plant had lost its bloom. Its flowers look like long grapes, dropping voluptuously from the branches in feminine tones of mauve, lavender and white. The soft tones and heady scent set a beautiful, calming and mesmerising scene – a perfect focal point for the garden and the ideal subject for a painting by a Master!

The Wisteria paintings were painted in Monet’s later life after he received a diagnosis of cataracts at the age of 72.  His painting during this time became even more indistinct than his earlier work – many thought he was becoming more abstract but it is more likely that he just couldn’t see! 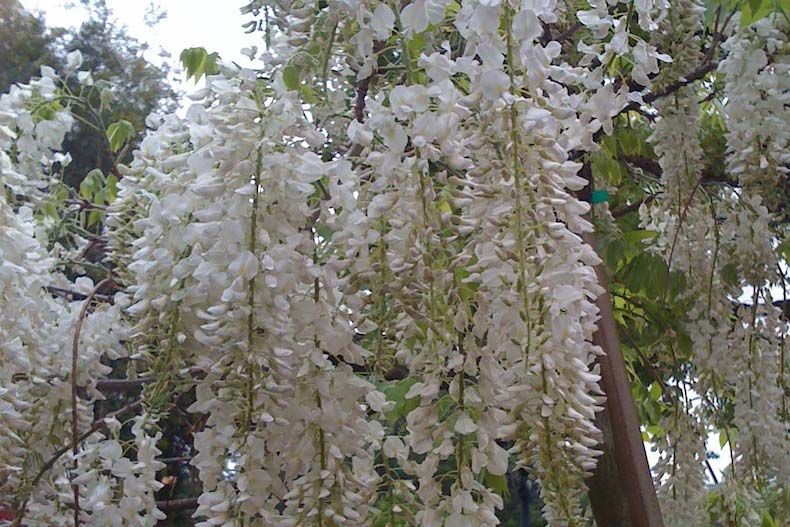 To recreate a little bit of Giverny glamour in your own garden try these plants;

Pendent clusters of fragrant, pea-like, violet-blue flowers, each with white and yellow markings appear in May and June on this vigorous wisteria. It is perfect for training over a sunny wall or stout pergola where the flowers can best be appreciated from below. To enhance flowering it requires ample space for the roots to become well established and it will need pruning twice a year.

It should be noted that certain wisteria plants can be harmful when ingested and advice should be taken if you wish to have a non-toxic version in your garden.  The Wisteria plant needs to get established before flowering and therefore if you are planting from seed a large degree of patience is required.

For those of you that prefer more instant gratification, go for an older, established pot grown plant that can be transferred to your required location.  Many species grow quite vigorously and twine attractively around objects in their path. The oldest wisteria plant in the UK, planted in the early 19th century is at the Fuller’s brewery building in Chiswick, London and is still thriving.