Late winter can be an exciting time in the garden. There is a sense of anticipation and promise that early perennials and flowering shrubs make more tangible. One such shrub from our selection is the intriguingly named Daphne. These fantastic shrubs can add not only a welcome splash of colour, but also bring to the garden an exotic aroma.
However, it will help you to have some background on the naming of this plant and, believe me, the story I’m about to tell you contains lust, trickery and rejection – not features you come across in every plant article! So, settle yourself down with a hot drink while I transport you to another world… 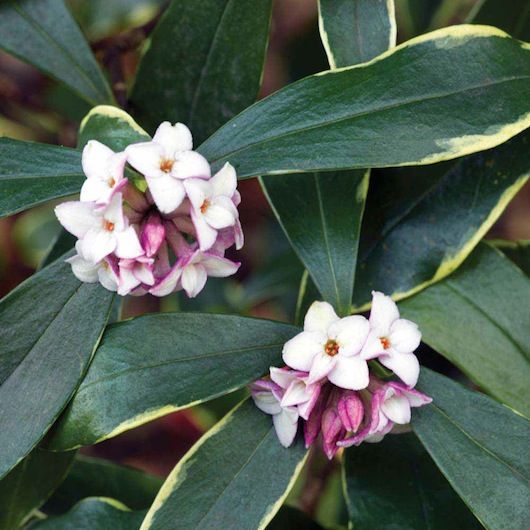 Steeped in Greek mythology, Daphne was a beautiful mountain nymph who caught the roving eye of the Greek God, Apollo. Apollo was a notorious womanizer but Daphne was not short of admirers and did not return the affections of the amorous Apollo. His fiercest competition was Lecippus of Pisa who was so desperate to be with Daphne that he pretended to be a nymph! The wily Apollo advised the other nymphs to bathe naked and Lecippus was exposed (literally!) as a nymph impersonator – those unforgiving nymphs tore him to shreds leaving Apollo to woo Daphne unchallenged. Daphne was rather frightened by the persistence of Apollo and while he was chasing her through the woods she called out for help – some say to her father, the river god Peneus who changed her into a laurel tree - thanks a lot, Dad! Apollo was so sad that the laurel became sacred to him, he broke off a branch of laurel and twisted it into a wreath to wear on his head in memory of Daphne. This was the tree named ‘Daphne’ by the Greeks, but we know it today by its Latin name, Laurel. Confusingly, it has absolutely nothing to do with the genus of shrubs called Daphne which belong to Thymelaeaceae family and not the Lauraceae family!

Slightly more recently, varieties of the daphne plant have been used in successfully in perfume making and less successfully in cosmetics – The sap of Daphne mezereum was historically used on the cheeks to produce redness which avoided the need to buy rouge or blusher. However, the rosy glow was actually brought about from damage to the blood vessels and it was a while before the connection between the glowing skin and the blood vessel damage was understood.

Daphne may be either deciduous or evergreen shrubs with flowers that do not have petals but instead have petaloid sepals. The leaves strongly resemble those of the true laurel and this seems to be the botanical reason why these plants were named Daphne; indeed, one species is named Daphne laureola, commonly known as "spurge-laurel”, others of the species have the common name of "spurge-flax" (Daphne gnidium) or "spurge-olive" (Daphne oleoides), although just to add to the confusion, they are no more a true spurge than a flax or an olive or a laurel! It is worth noting that all parts of the Daphne shrub are poisonous unlike the true laurel. They are grown principally for the fragrance and beauty of their flowers and combine well with Helleborus, Hammelis or Corylopsis pauciflora.

Spring is definitely in the air. Nature and the plant kingdom are waking up after their winter’s rest and early flowers from shrubs, bulbs and perennials are especially eye-catching against otherwise bare soil or short winter grass. Why not visit a local country house or garden open to the public to enjoy this spectacle? Longer days also mean you may be lucky enough to get home in the light. You may even have time for a spot of light gardening after work!
Love is also in the air! Don't forget February brings Valentine’s day. It's the day of the year to 'say it with flowers' - better still buy your loved one a plant that will bring delight for years. Garden centres are a great destination to find the perfect gift.