The Zinnia: A Flower that's Hard on the Eyes?

Given the fact that zinnias are experiencing a resurgence in popularity at the moment, this hard-to-look-at flower has come a long way since it was despised by 16th century Spaniards in Mexico. In fact, the National Garden Bureau has proclaimed 2011 as the Year of the Zinnia. 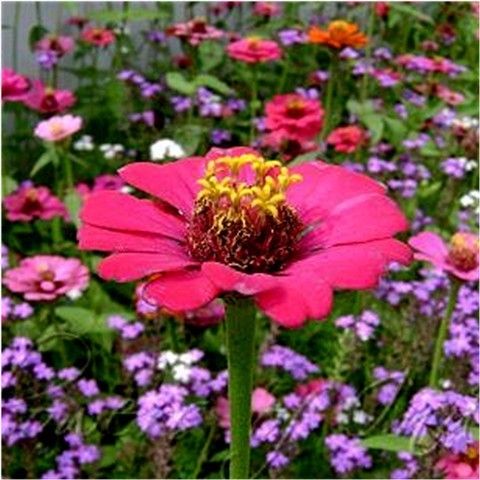 Garden zinnias didn't make their way to the U.S. until the 19th century. We have German botanist, Johann Gottfried Zinn (1727-1759), above left, to thank for these zinnias arriving here at all. He was the first to describe the flower and subsequently received the honor of having it named after him. At that point, the zinnia was not much to look at (see Zinnia acerosa below, for example). Undeterred, botanists in Germany, Holland, and Italy began breeding by selection. The wild form of the white-flowered Zinnia acerosa eventually produced blossoms in several other colors. These, along with two selections from that strain, ‘Mammoth' and ‘Striata', made their way to this country in the early 1900s. They were an immediate hit with gardeners. By the 1920s, the first dahlia-flowered zinnia,‘Giant Dahlia,' had made its appearance. It was discovered as a natural mutation of 'Mammoth' by John Bodger of California's Bodger Seeds Ltd. Within the next few years he selected from this new strain a large flat-flowered type called 'California Giant'.

Other native species involved in breeding programs include Zinnia angustifolia, Zinnia elegans, Zinnia grandiflora (all below), and Zinnia haageana. The first three, along with Zinnia acerosa range from the U.S. south through Mexico and often further south into Central and South America. Zinnia haageana is native to Mexico and is often called "Mexican Zinnia."

The 1950s saw the development of the first tetraploid zinnia, 'State Fair." Through genetic manipulation during the breeding process, tetraploid zinnias have four sets of chromosomes instead of the normal two. Tetraploids generally are more vigorous and have larger flowers. Further selection of new strains in Zinnia haageana produced the small-flowered 'Persian Carpet' and 'Old Mexico'.

While it may seem incredible that so many beautiful zinnias arose from such humble beginnings, it's easy to see why, once you've started zinnias from seed. The flowers will not always be uniform. There will usually be some variation in size, shape, fullness, and color. One of my fellow gardeners liked to collect zinnia seed, just to see what interesting flowers might crop up after sowing. It was usually an amazing array of varieties, some flowers even green with no ray petals. Below is an interesting variation among the Giant Dahlia zinnias I sowed in our gardens this year. It's twice double and has two distinct colors, pink and orange. It is almost as if two separate flowers had been pasted one on top of the other.