Roses have it all

Roses have it all – pure beauty, perfection in form, and the paradox of their thorns has not been wasted on generations of poets and lovers. A rose without thorns may be very practical, but it lacks an essential part of its character. The red rose is a symbol of fiery love, social involvement, as well as secrecy ‘sub rosa’. The white rose stands for purity, pure beauty and complete honesty. Fabulous cut flowers, roses are a great asset in the garden too. 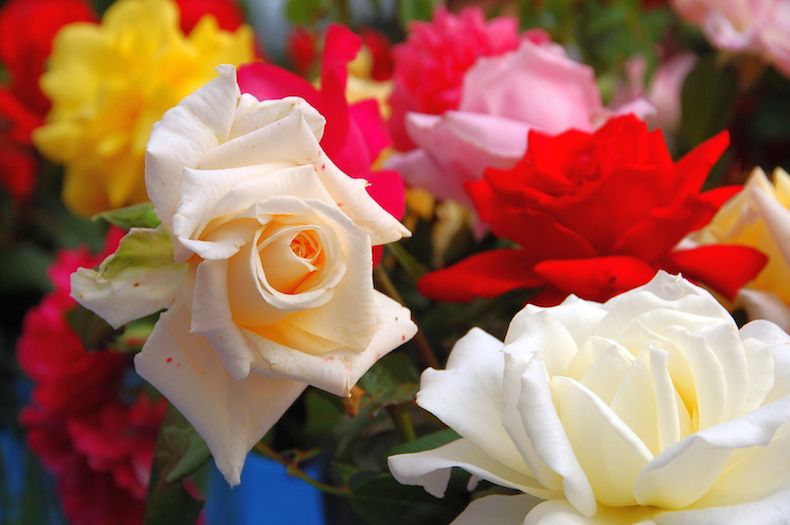 Roses are part of the large and wide ranging family of the Rosaceae, which also include the apple and pear, cherry, (dwarf) medlar, peach, almond, pyracantha, blackberry and rowan: a total of over 120 genera with a total of more than 3500 species. The species which belong to the genus Rosa are usually deciduous, they almost all have thorns or bristles and they all have a composite leaf. That can range from three to more than fifteen leaflets per leaf.

Nearly all species originally had five petals, but on some cultivated forms there may be more than a hundred. Breeders work actively to increase the number of petals because the rose’s aroma comes from those petals. The more petals, the more scent. There are also roses – such as the sweet briar – with scented green foliage.

Roses can bear fruit: the hips. These can vary substantially between species and on many cultivars they never appear because the flowers cannot be pollinated because of their shape or for some other reason. The hips can be bare or have hairs or spikes, and be red, orange, brown or black. The ‘flesh’ of the hip) is often very rich in vitamin C.

The classification of roses in groups:

There are also standard roses, which are shrub or weeping roses which are grafted onto a rootstock. Standard roses often consist of three parts: the root part, the intervening trunk and the cultivated graft.