Holly and Ivy have to me always seemed joined together like love and marriage or birds and bees. These two plants just conjure up all that is traditional and festive. Not only are holly and ivy decorative, they are also extremely versatile and useful – and not just at Christmas! 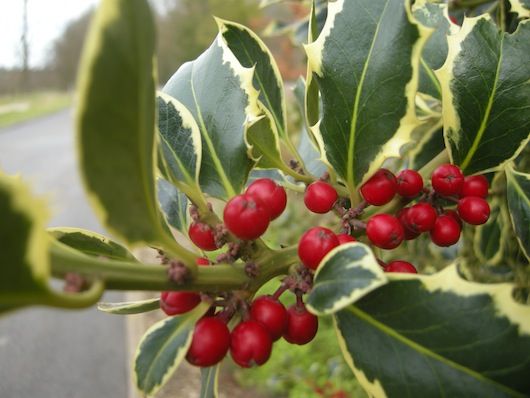 Holly
Holly is an evergreen tree and can reach a height of over 30 foot. It has smooth bark and the dark green leaves can be shiny, leathery or waxy. Some varieties have extremely spiny and prickly leaves, others are less hard to handle. Holly provides an excellent source of shelter and an extremely important food supply for numerous species of birds and other wild animals.

The plants are either male or female with only the female plant producing the red berries which are a traditional feature of winter landscapes. In complementary medicine holly has a number of uses including as an astringent, a diuretic, an expectorant and a febrifuge or fever reducer. Specifically Holly has been used for gout, kidney stones and urinary problems, for chronic bronchitis, rheumatism and arthritis.

Ivy
Ivy is a bit of a dichotomy. By some it was considered as a dark and oppressive plant and yet by others it is considered as a beautiful addition to the garden. In reality, both can be true! Ivy’s bad reputation was probably gained because it grows by clinging to trees and bushes seemingly choking them to death.

However, Ivy is actually an incredibly valuable plant for wildlife as it provides shelter at all times and the winter flowers and berries are a reliable food source when other supplies have almost disappeared. It can reach an impressive 30m (100ft) with support.

In homeopathy, dried ivy leaf extract is used in the treatment of bronchial asthma and coughs. Ivy berry vinegar was said to have been used as a cure in the Great Plague of London 1665. And for those of us who may be challenged in the follicle department (aka balding!) – wearing an ivy wreath on the head is said to prevent hair-loss and hangovers!

Together they are an unbeatable Christmas combo bringing together pagan and Christian symbolism with modern day festivities.

Our plant choices
Ilex aquifolium 'Argentea marginata' has broadly oval, spiny dark green leaves streaked with wide cream margins which can be pink coloured when the leaves are young. This beautiful female variety bears an abundance of bright red berries and is great for hedging or as a specimen plant. Ilex ‘Atlas’ is an upright male shrub that has spiny, glossy dark green leaves and is an excellent choice for landscaping or hedging.

Hedera helix ‘Goldheart’ is a fabulous looking variety with dark green leaves that have a butter yellow centre. It is slow to establish but then grows rapidly. It is not suited for ground cover. Hedera ‘Dentata’, more commonly known as ‘Elephant’s ears’ is a vigorous plant that is suitable for growing against a wall or as ground cover. ‘Dentata’ has large light green drooping leaves and normally will grow to a height of 5m or 15ft.

Seasonal highlights for December
Living decorations are the height of style, so much better than inflatable Rudolphs and Santas! Any home can be made more welcoming at this magical time of year with the addition of plants indoors and out.
Plants and greenery have always been fundamental to Christmas celebrations but how much more in keeping with contemporary thinking to use as much real and living foliage as possible? Garden centres this year will be stocking more living decorations and plants with a decorative twist than ever, so visit yours for the essentials that will help you ‘deck your halls’.