February exciting? Surely not? In this country the period between New Year and Easter is only enlivened by Shrove Tuesday (when we make pancakes) but in parts of the world with strong Caribbean, Brazilian or Portuguese influences they have that thing called Carnival – wow! Exciting it certainly is. With a history dating back to Ancient Greece, it was incorporated into the calendar of the Catholic Church in the Middle Ages as a pre-Lenten feast. It has been big in Venice for hundreds of years, an opportunity for excess made possible by masks and hidden identities.

It was, however, the abolition of slavery that really triggered the amazing spectacle we can experience today. Drilling down for one message in the whole story it is that for a short time normal rules don’t apply, anything goes. It’s like a safety valve, people can let off steam then return to their normal lives. 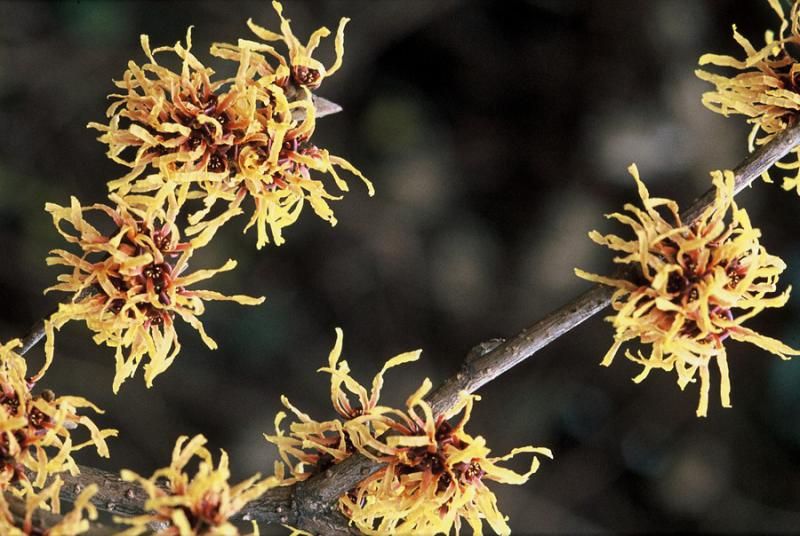 Witch hazel
It’s not too much of stretch to suggest that Hamamelis, or by its more exciting and evocative popular name ‘Witch hazel’, is a plant that fits in perfectly with the Carnival mood. In February, when we are most in need of some glamour in the garden, it can be seen in its finery.

The fragrant flowers in clusters of narrow petals are reminiscent of the beads and sequins of carnival costumes, exciting to look at after the bare branches of deep winter. The flowers and fragrance of Hamamelis emerge from the jaws of winter and are welcome proof that spring is on its way.

Hamamelis x intermedia is a medium-large shrub that can reach up to 4m in height and spread at maturity. ‘Sunburst’ is a little more compact (at 2.5m), making it the perfect choice if space is limited.

Other Hamamelis also flower now, great examples being varieties of Hamamelis mollis (Chinese witch hazel), which again bears yellow flowers or Hamamelis vernalis (Ozark witch hazel) which bears flowers in a range of colours from yellow through orange to red-tinged.

Carnival flavour
Hamamelis can really bring a Carnival flavour to our gardens at what can appear to be a dormant time. They tolerate a range of soils from acid to neutral, and even deeper soils over chalk. Put them in a sheltered spot and get the added benefit of fragrances accumulating, but they do like to have plenty of light getting to them.

It may not be Rio outside your window, but some plant magic courtesy of Hamamelis will certainly challenge our traditional assumptions about February in the garden.