It’s summer and the BBQ invites start coming thick and fast. But have you been invited to a Royal Garden Party this year? If you have, lucky you, however, if you’re like me and have never been invited then why not take your cue from Royalty and host your very own garden party. Every summer, the Queen hosts at least three parties at Buckingham Palace, as well as one at the Palace of Holyroodhouse in Edinburgh. Over 8,000 people from all walks of life attend each of these parties. 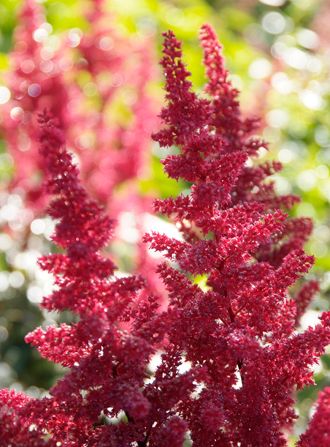 Now I know that most of us can’t compete with the Queen – My garden could probably hold 18 guests rather than 8,000. When it comes to invitees, it will probably be the same familiar faces that normally come to my plain old BBQs. So let’s all inject some excitement this year with the wow factor of fabulous perennials that flower in the garden year after year. This month we have a trio of garden lovelies that never fail to impress!

Our first pick is Astilbe commonly known as False Goat's Beard or False Spirea. Astilbes are very easy to grow and will reward you year after year with a reliable show of ornamental plume-like flowers in delicate hues of white, pink and red. The blooms are held high on erect stalks above clouds of foliage. Bonus benefits are the length of time they bloom and the fact that they are generally pest free. They grow well in shady areas and add interest and texture wherever they are planted. Plants to seek out are Astilbe ‘Fanal’ which produces dense panicles of dark crimson flowers or the intriguing Astilbe ‘Perkeo’ which produces pyramidal spires of pink flowers.
Next on the guest list is Astrantia, not a particularly common plant in UK gardens although it should be! Its unusual looks are characterised by densely packed flowers on oval bracts. This flower/bract configuration give the plant a star like quality – which seems to have influenced the name: Astrantia is said to originate from Astron, the Greek word for star. Look out for Astrantia ‘Sunningdale Variegated’, with its wonderful foliage or the pretty Astrantia major which produces green, pink or sometimes deep purple-red flowers.

Our last guest is by no means the least… Geum is a versatile garden plant that loves the sun but can also thrive in partial shade. The flowers are most common in flame shades of fiery red, burnt orange and molten amber. The dark green foliage is covered in stiff hairs and the plants are very effective as bedding plants or when used in borders. Geum chiloense ‘Fire Opal’ is a stunning plant, producing reddish-orange flowers on purple stems. For rock gardens consider Geum montanum with its deep yellow flowers produced on short stems.
Any garden party will be enhanced with these wonderful plants as part of the backdrop. Who cares if the guests aren’t the high and mighty of the land, as long as you enjoy their company? Have fun!

Gardening is for everyone and in June it couldn’t be easier to interest the most reluctant participants. Get children started this summer with their own pots or mini-garden. Some retailers are promoting special ‘children’s’ seeds and plants this year and many now invite school parties in to do hand-on activities. If you have elderly neighbours or relatives, try to give them a helping hand with their gardens – it could rekindle an interest for them.

The longest day falls towards the end of this month and carried enormous significance for our forebears as a key point in the year. Even in the south of England the long evenings are a delight, giving extra energy and zest to life, but the further north you go the days just get longer. In the far north of Shetland there is very little night at all at this time of year and the animal kingdom is active virtually around the clock.